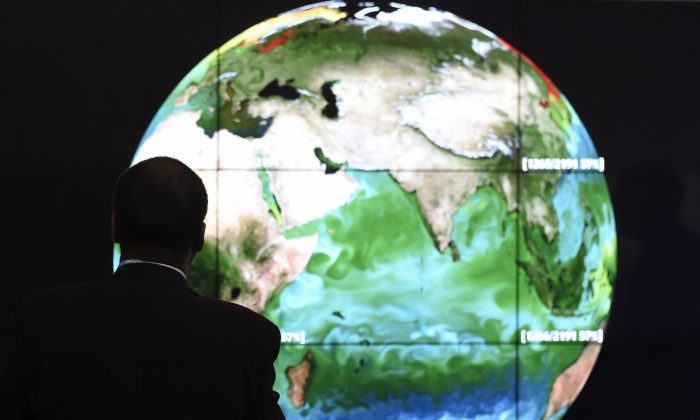 A conference attendee looks at a projection of the Earth on the opening day of the COP 21 U.N. conference on climate change in Le Bourget, on the outskirts of the French capital Paris, on Nov. 30, 2015. (Alain Jocard/AFP/Getty Images)
Opinion

As the Paris climate deal nears implementation, the possibilities for corporate subterfuge are endless—but the real problem may be our own lifestyles

An extreme weather event hits Norway. Finally shocked into doing something radical about climate change, Norwegian citizens propel the Green Party into government, where it declares an immediate suspension of oil and gas production. The new prime minister promises to provide Europe instead with electricity from the next generation of “clean” nuclear power.

The European Union, heavily dependent on Norwegian hydrocarbons, isn’t happy. At the behest of Brussels, Russian commandos kidnap the Green prime minister and force him to restart the flow of oil and gas. To ensure compliance, the Russians become a shadow occupation force. The prime minister is desperate to avoid bloodshed and so tries to accommodate his new “partners.” Most Norwegians don’t see much change in their everyday lives. Some citizens, however, prepare to fight back.

This is the plot of Occupy, a Norwegian TV drama now available for streaming on Netflix. Some of the plot is all too plausible. For instance, Europe is indeed dependent on Norwegian energy. Norway is the second largest supplier of oil to the EU (at 12 percent) and the second largest supplier of natural gas (at 30 percent), in both cases after Russia. It’s not inconceivable that an extreme weather event could hit Norway. Major hurricanes routinely hit the country.

And perhaps the Norwegian Greens could some day take over the government, even though the party only has one seat in parliament after achieving a little less than 3 percent in the 2013 elections. Even without the Greens taking over, Norwegian politicians across the political spectrum take climate change very seriously. In March, the Norwegian parliament overwhelmingly passed legislation that will force the country to meet stringent carbon emission caps. Only the right-wing, anti-immigrant Progress Party—now, admittedly, the third largest party in the country—challenges the scientific consensus that humans are behind global warming.

Other elements of Occupy are perhaps less plausible. Norway is indeed researching new, presumably safer nuclear power plants, but these alternatives might never prove viable. Meanwhile, it’s hard to imagine Russia and the E.U. teaming up to do anything—not even a game of mixed doubles, much less a soft invasion of a Scandinavian country. Presumably, Russia would welcome a Norwegian oil and gas stoppage, which would give Moscow more access to European markets and more leverage over Brussels.

And taking over Crimea is one thing—Finlandizing Norway quite another. Russia has historically had good relations with Norway, going back to the Soviet expulsion of the Nazis in World War II. The operation of Russian troops outside the “near abroad” of former Soviet lands with significant Russian-speaking populations is not in the cards.

Still, Occupy is a gripping drama, and an important reminder of the life-and-death stakes involved in petropolitics. Governments should indeed be embarking on radical efforts to cut back on carbon emissions, to which there will be considerable pushback. In the end, however, I suspect we’ll see a different kind of “occupation.”

Before I sketch out that scenario, let’s take a closer look at the Paris accord on climate change, signed at the U.N. on Earth Day, April 22, and its likely impact.

The world made history Friday, April 22, when 175 countries signed the Paris agreement on climate change, the largest number of countries to initial an international agreement on its first day. The next step is for member states to officially join the agreement through their own ratification processes (15 countries did so on that first day). The treaty comes into force when its signatories add up to 55 percent of global carbon emissions. So far, in terms of countries that have pledged to join the agreement, supporters have counted up about 50 percent and expect the threshold to be reached later this year.

“We are breaking records in this chamber. But records have also been broken outside,” U.N. General Secretary Ban Ki-moon said at the gathering on Friday. “Record global temperatures, record ice loss, record carbon levels in the atmosphere. We are in a race against time. I urge all countries to move quickly to join the agreement at the national level so the Paris Agreement can enter into force as early as possible.”

Any agreement that attracts nearly universal support will be either watered-down, unwieldy, or both. What insured the Paris agreement’s success is its lack of binding provisions.

As part of the Paris process, countries submitted national plans of action to reduce carbon emissions with goal of limiting the overall increase in global temperature to somewhere between 1.5 and 2 degrees Celsius. There is considerable variation in these national plans. The United Kingdom and Germany are aiming to become carbon neutral in the second half of the 21st century. China on the other hand has pledged merely to achieve peak emissions by 2030. Other countries are arrayed along the spectrum in between, including a few island nations that will probably disappear beneath the waves because of the failure of the international community to hold each other’s feet to the fire.

Of course, it’s a good sign that the Republican doofuses in Congress have blasted the agreement, which means that the document isn’t so compromised that even climate-change deniers support it. Fortunately, the Obama administration can sign the accord without Senate action, treating it as an “executive agreement.” But as Senate Majority Leader Mitch McConnell (R-Ky.) pointed out, the agreement “is subject to being shredded in 13 months.” McConnell, back in January, still thought a Republican might gain the White House in 2016. That is looking increasingly unlikely.

Climate change activists speak of a “Paris effect.” Negotiations, in other words, have created a virtuous circle of countries and institutions competing with one another to prove that they are greener than thou. According to CNN,

It’s nice to see international competition for a good cause: a veritable Olympics of carbon cuts. But it’s not enough. Even those green extremists, the World Bank and the IMF, concur.

Last week, both international financial institutions declared that the only way to stop global warming is to make the polluters pay. “Putting a price on carbon pollution is by far the most powerful and efficient way to reduce emissions,” said Jim Yong Kim, the head of the World Bank. “We strongly urge people to prepare for the carbon pricing that is to come.”

Making the polluters pay will eventually translate into higher gas prices, home heating costs, more expensive airline tickets, and the like. The state of Washington is considering a ballot initiative on carbon emissions that would push people away from using fossil fuels while providing tax breaks for those who can’t afford to make the shift. Neighboring British Columbia instituted a similar law in 2008, reducing emissions without adversely affecting the economy.

These are nudges, and they are important. We still need a game changer. I’m not talking about a new technology, though it would be nice to have a miraculous new energy technology save the day, Hollywood style, at the last minute. No, we need some government to make a radical break with fossil fuels, as Norway does in the fictional Occupy.

Canada, as the British Columbia tax suggests, is a pretty green place. Prime Minister Justin Trudeau wants to make carbon taxes, which are in place in four of the country’s 13 provinces, a national strategy.

But Canada’s carbon footprint (14.1 metric tons of carbon dioxide per capita) is only a little bit behind the United States (17), both being among the highest in the world. Canada is the fifth largest producer of oil, far ahead of Norway, and the fifth largest producer of natural gas, again ahead of Norway. And here’s the kicker: The United States is far more dependent on Canada for its hydrocarbons than Europe is dependent on Norway. In 2015, Canada was the number one supplier of oil to its southern neighbor, responsible for 40 percent of the total.

So, let’s imagine that Justin Trudeau makes a radical move and shuts down not just the tar sands that inspired the Keystone pipeline (something he has no intention of doing) but closes all of Canada’s oil and gas producers as well. Or, if it’s too difficult to foresee Trudeau experiencing such an overnight conversion, let’s imagine a greener prime minister in the near future who is so freaked out by the forest fires raging across the country—Canada is also experiencing rising temperatures twice that of the global average—that she stops pumping stuff out of the ground.

Should the TV industry decide to remake Occupy for an American audience, transposing all of the European elements to North America, U.S.-Russian military cooperation and Canadian resistance to Moscow’s stealth take-over would certainly make for dramatic viewing. It would just be even more implausible than the current European version.

Executives from Suncor, Canadian Natural Resources, Imperial Oil, and Enbridge—the four largest Canadian petroleum companies—gather at a weekend retreat outside Toronto and invite along several U.S. “consultants” with “international experience.” The conversation produces a few “action items.” Number one is to pour money into the political opposition to the “wacky” greens and effect regime change at the polls. Number two is to tighten the screws on the Canadian economy and ensure that the citizenry associates green policies with high taxes and low growth. The third “fail-safe” action is to insert, via thumb drive, some child pornography on the prime minister’s home computer.

No Russians. No occupation. No mess.

Let’s face it: The hydrocarbon-industrial complex is not going to go down without a fight. Whether it’s the Koch brothers funding congressional yahoos, African strongmen making deals with ExxonMobil, or Chinese Communist Party officials keeping open coalmines to employ the 6 million people in that sector, the resistance to serious cuts in carbon emissions will be intense.