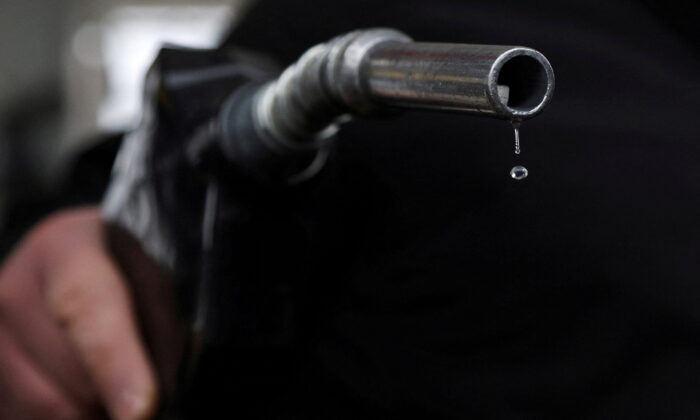 Gasoline drips out of a nozzle held by a gas station mechanic in Somerville, Massachusetts, on March 7, 2022. (Brian Snyder/Reuters)
Economy

WASHINGTON—Oil executives defended themselves in the Congress on Wednesday from charges by lawmakers that they are gouging Americans with high fuel prices, saying that they are boosting energy output and no one company sets the price of gasoline.

Members of the House of Representatives Energy and Commerce Subcommittee on Oversight and Investigations grilled companies on why gasoline prices remain elevated even though prices have dropped for crude oil.

U.S. gasoline prices have surged since Russia’s invasion of Ukraine in February and after Western countries slapped sanctions on Moscow’s energy exports. Pump prices hit a record, before inflation, of $4.33 a gallon on March 11, and since then have slipped about 4 percent to $4.16 a gallon, according to the AAA motorist group.

In the same time frame, U.S. gasoline futures have fallen more than 7 percent to $3.07 a gallon as international crude prices have dropped more steeply, more than 9 percent, to about $102.11 a barrel.

Russia’s invasion of Ukraine “has further reduced the world’s oil supply as more and more companies are unwilling to buy Russian oil—and rightly so,” said Rep. Diana DeGette (D-Colo.), chair of the subcommittee. But “If the price of gas is driven by the global market, why is the price of oil coming down but the price at the pump is still near record highs?”

DeGette questioned the billions of dollars in profits earned by the companies, and cited $30 billion in taxpayer subsidies they receive as a reason they should help lower gasoline prices.

“Changes in the price of crude oil do not always result in immediate changes at the pump,” Wirth said, adding that “it frequently takes more time for competition among retail stations to bring prices back down at the pump.”

President Joe Biden has been struggling to control rising consumer prices at the pumps and at grocery stores, a vulnerability for his fellow Democrats as they seek to maintain razor-thin majorities in both chambers of Congress in the Nov. 8 midterm elections.

Washington’s sanctions on Moscow include a U.S. ban on Russian energy imports. Biden has said higher fuel prices result partially from Russia’s invasion. Last week, he urged oil companies to boost output and service American families instead of investors, and announced a record release of crude oil from strategic reserves.

Republicans, including Rep. Morgan Griffith (R-Va.), blamed high pump prices on Biden’s policies, including a decision to revoke a key permit for the Keystone XL pipeline to that would have imported crude from Canada once completed, which could have taken several years.

“It is impossible to generate confidence or invest in production today when future production is clearly being blocked by this administration,” Griffith said.

Democrats have noted that oil companies have thousands of leases to drill on public lands that they are sitting on.

Wirth restated Chevron’s plans to boost capital expenditure this year by 50 percent, with about half going to increasing oil and gas output and half to renewable fuels and lower-carbon energy.

Gretchen Watkins, president of Shell USA, said her company neither controls nor owns the 13,000 gas stations that carry its brand. “Each of these independent businesses is responsible for setting the local retail price of gasoline.”

“No single company sets the price of oil or gasoline,” said Darren Woods, chairman and CEO of Exxon. “The market establishes the price based on available supply, and the demand for that supply.”

Pioneer CEO Scott Sheffield said it would take time to rev up the company’s production in the Permian Basin, citing worker and supply chain shortages and the decommissioning of many rigs and hydraulic fracturing fleets when prices were low in 2020.

By Timothy Gardner and Liz Hampton