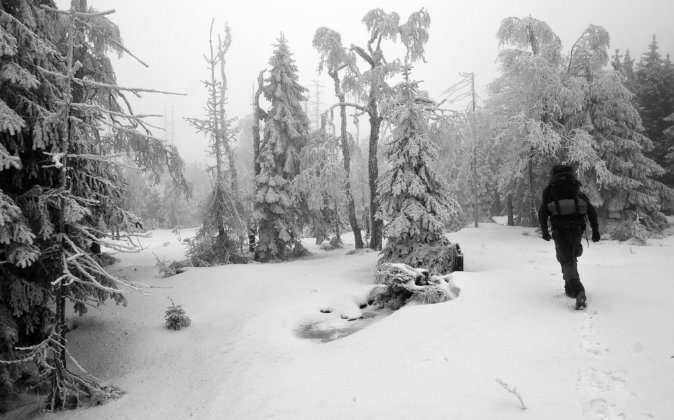 A file photo of a person walking through the woods in winter. According to old Native lore, and also to modern beliefs, one may encounter elusive and malevolent creatures during such a walk in the Canadian wilderness. (Shutterstock*)
Beyond Science

Canada has its own version of the Loch Ness Monster. It also has age-old legends and modern sightings of various other creatures—creatures often terrifying not only because they are mysterious, but also because they are said to be malevolent toward humans.

As with Bigfoot (known as Sasquatch in Canada), these creatures lurk on the periphery. Some people relegate them to the realm of myth, fancy, and attention-seeking hoaxes. Others maintain a strong belief in their existence and sightings are continually reported.

‘Wendigo, wendigo, its eyes are ice and indigo …’

Perhaps foremost among these creatures is the wendigo. The wendigo goes by various names across different Native tribes, and it is also told of by Native peoples in the United States, particularly in the northern states, close to Canada. It is a ghoulish creature, man-eating.

Its skin is said to be yellowish, sallow, and taut. It is much taller than humans, 15 feet or so by some accounts, with long, yellowed fangs and a long, lolling tongue.

It is said to be a solitary creature. It’s name in various dialects means “he who lives alone,” or “evil spirit who devours mankind.” The wendigo has long been connected with insanity, particularly in people who have lost their rationality as a result of being immersed in evil occult arts.

Windigo (another variation on the spelling of wendigo) psychosis is described by MediLexicon.com as “a culture-specific syndrome of some Canadian autochthones, consisting of delusions of being transformed into a cannibalistic monster called a windigo, or wittigo. The sufferer also experiences agitation, depression, and fears about inability to control sadistic impulses.”

In history, tribal laws held that insane people troubled by bad spirits must be killed, otherwise they could become cannibalistic wendigo. Wendigo trials are a chapter in the history of colonial-Native relations in Canada.

“There are few areas of tribal custom more inherently at odds with Canadian law than the wendigo killings,” wrote Sidney Harring in “Violent Crime in North America,” edited by Louis A. Knafla. “A world of strange spirits in the forest that would kill you if you did not kill them first made complete sense to Ojibwa and Cree Indians. A traditional law that provided for that defense was fundamental to those societies.”

Harring explained that Joseph Fiddle, a high-profile Ojibwa chief imprisoned for killing a woman to prevent her from becoming a wendigo, was used to set an example. Fiddle’s sentence was less lenient than previous wendigo killing sentences. The government wanted to quash tribal law and reinforce Canadian law among the Natives.

Fiddle wrote in an appeal to the courts, quoted by Harring: “I desire to ask you not to look upon me as a common murderer. I was the chief of my tribe, we had much sickness, and the sick ones were getting bad spirits and their friends were afraid of them …”

While it was decided that Fiddler should be held long enough to set a stern example, he was not given the death penalty. He became ill in prison and died three days before his immediate release was ordered.

European settlers at first dismissed the Native accounts of wendigo, but “In the 17th century, explorers and missionaries began to report encounters with this strange creature, which they described as a devil, or a werewolf with glowing eyes, large yellow fangs, and a long tongue,” writes Oliver Ho in the book “Mutants and Monsters.”

This alleged wendigo sighting by teenaged boys was posted on YouTube last year and got more than 3 million views:

What is said to be the face of a wendigo, captured on video by a group of teens. (Screenshot/YouTube)

What is said to be the figure of a wendigo, captured on video by a group of teens. (Screenshot/YouTube)

A popular poem, written by Ogden Nash, begins: “The Wendigo, the Wendigo! Its eyes are ice and indigo! Its blood is rank and yellowish! Its voice is hoarse and bellowish!”

Ogopogo is said to be a long, serpentine, aquatic creature that dwells in Lake Okanagan in the south central interior of British Columbia, Canada. Sightings are reported annually, and many locals believe in the creature, though some remain skeptical, of course.

In Native folklore, it was called N’ha-a-itk, or lake demon. The portion of the lake where recent sightings occur fits with the monster’s location in the folk tales. The first recorded sighting by a Caucasian person was in 1872, when Mrs. John Allison is said to have seen it.

The Natives would bring ogopogo offerings if they had to pass through its territory by canoe, as it had been known to attack.

An alleged ogopogo sighting in Kelowna, British Columbia, Canada. The dark spots are thought to be the long, serpentine creature’s back. (YouTube)

One local says it is just an irregular current:

An ogopogo representation in a park in Kelowna, British Columbia, Canada. (Wikimedia Commons)

A giant bear with a strange gait has been told of in Native tradition. Some have thought the tales may be a distant memory of woolly mammoths or mastodons passed down orally. When some native peoples first saw elephants they applied the same word to them as they use for this stiff-legged bear. The stiff-legged bear is, however, said to eat people, while the woolly mammoth and mastodon were herbivores. No mention is made of a trunk either.

Another theory is that the Natives may have uncovered fossils of a woolly mammoth and understood them to belong to large bears with structures that would make their movement relatively stiff.

This creature was called Yakwawiak by northeast Algonquian tribes, a word that may have been borrowed from the Iroquoian word Nia’gwahe, which means “great bear.”

An illustration of a woolly mammoth skeleton. Did Native peoples see woolly mammoth bones and think they belonged to a great, stiff-legged bear? Or was there really a giant bear with a stiff gait encountered in the Canadian forests? (Shutterstock)