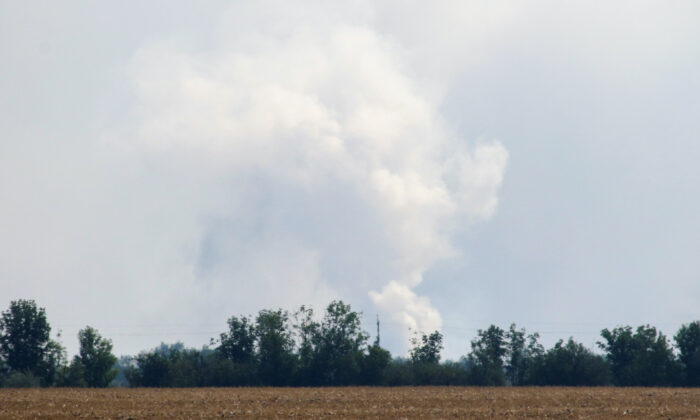 Smoke rising above the area following an alleged explosion in the village of Mayskoye in the Dzhankoi district, Crimea, on Aug. 16, 2022. (Reuters/Stringer)
Russia-Ukraine War

LONDON—Russia on Tuesday blamed saboteurs for orchestrating a series of explosions at an ammunition depot in Russian-annexed Crimea.

The incident follows a series of explosions last week at a Russian-operated air base in Crimea which Ukrainian officials hinted were part of some kind of special operation but which Moscow said at the time was an accident.

Russia’s defense ministry said in a statement published by state news agencies on Tuesday that nobody had been seriously injured in the latest explosions, which it said had also damaged power lines, an electricity substation, railway infrastructure, and some residential housing in northern Crimea.

Footage on Russian state TV showed an electricity substation on fire near the town of Dzhankoi in Crimea and a series of large explosions on the horizon which authorities said were caused by ammunition detonating at a military base.

It was not immediately clear how saboteurs had triggered the blasts, though Russian state media speculated they may have used small drones to bomb the ammo depot and other facilities.

There was no immediate claim of responsibility from Ukraine, which is battling to push back Russian forces nearly six months into the war that began with Moscow’s Feb. 24 invasion.

Two senior Ukrainian officials took to Twitter to exult in the explosions, however, with one, presidential advisor Mykhailo Podolyak, hinting at possible Ukrainian involvement while stopping short of confirming such a role.

“[The] morning near Dzhankoi began with explosions,” wrote Podolyak.

“A reminder: Crimea of normal country is about the Black Sea, mountains, recreation and tourism, but Crimea occupied by Russians is about warehouse explosions and high risk of death for invaders and thieves. Demilitarization in action.”

Russia cites the demilitarization of Ukraine as one of its main aims in Ukraine, something it says is necessary to preemptively ensure its own security in the face of what it has cast as uncontrolled expansion by the Western NATO military alliance.

Russia’s Kommersant newspaper reported another possible act of sabotage in Crimea, quoting witnesses as saying that plumes of smoke could be seen over a Russian military air base on the peninsula.

Sergei Aksyonov, the top Russian official in Crimea, said around 2,000 local people had been evacuated from a village near the ammo dump beyond a 5 kilometers (3.1 miles) perimeter.

He said that two people had been injured in the ammo explosions and that there was disruption to railway traffic between the peninsula and the rest of southern Ukraine and Russia.

Russia has used Crimea, which it annexed from Ukraine in 2014, to reinforce its troops fighting in other parts of Ukraine with military hardware, a process Kyiv is keen to disrupt ahead of a potential counter-offensive in southern Ukraine which it has for weeks been suggesting it may launch.

Russian media reported that railway repair work was under way, while a company that runs passenger trains through Crimea said seven had been delayed and rail traffic on part of the line in northern Crimea suspended.

It said the trains were likely to be delayed by one to three hours.