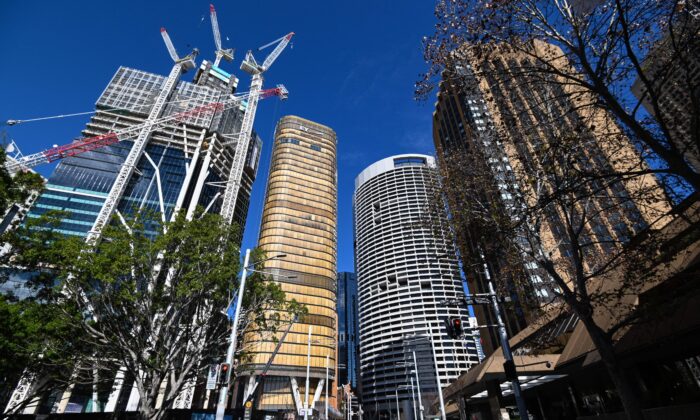 This picture shows a quiet street in the business district in Sydney, Australia, on June 26, 2021. (Saeed Khan/AFP via Getty Images)
Australia

The business sector has called on the Australian government to temporarily boost the level of skilled migration to tackle acute labour shortages exacerbated by the loss of workforce during the COVID-19 pandemic.

The Business Council of Australia (BCA), an industry association whose members comprise the chief executives of over 100 of the country’s largest corporations, has made many recommendations to the Australian government over a wide range of topics in its submission to the 2022-23 budget.

In particular, the council recommended the federal government push up the annual permanent skilled migration ceiling to 220,000 in the next two financial years, before letting it revert to 190,000 in 2024 to 2025.

A spokesperson from the Department of Home Affairs told The Epoch Times that Australia’s Migration Program was carefully designed to achieve a range of economic and social outcomes that meet the country’s needs while taking into account many factors.

“The size and composition of the permanent Migration Program is set on an annual basis,” the spokesperson said.

“When planning the Migration Program, a wide range of factors are considered including stakeholder views, immediate and long-term economic and social needs, and the family reunion needs of Australians.”

The council also recommended that the pre-election budget issued on March 29 concentrate on upgrading the labour force’s skills.

The proposal included a new ambitious national skills agreement expected to better match training with the needs of learners and their employers. In addition, it also called for the government to prolong the Boosting Apprentice Commencement wage subsidy to another 12 months at a reduced rate.

“We need to throw everything at addressing the structural issues threatening to stall momentum in the recovery such acute worker shortages and record low business investment, while laying the foundations for long-term and stronger economic growth,” BCA chief executive Jennifer Westacott said.

“The country has moved beyond waiting for COVID to reach its end point. We can no longer sit back and wait for a return to normal.”

Westacott said that more government big spending was not the right approach to speeding up economic recovery.

“It’s about ensuring business can take the baton and drive faster and sustained private sector-led growth,” she said.

Meanwhile, the BCA wanted to encourage more women to return to work and help them to move up in their careers after having children by proposing a shared carer paid parental leave bonus that supports couples to share parental responsibilities.

In the field of tax, the BCA called for support for states that wanted to implement necessary tax reform. For example, the federal government could assist with stamp duty removal by providing states with an explicit guarantee that they would not suffer any disadvantage in the allocation of GST revenues.

At the same time, the council called for the Department of Treasury to drive up the turnover threshold for the 25 percent company tax rate to either $250 million (US$180 million), $500 million, or $1 billion instead of the current $50 million level.

It also suggested that the federal government lower the tax rate to 25 percent for all companies from the current 30 percent when fiscal conditions permit.

Additionally, the BCA proposed a 20 percent investment allowance for all companies so that they could improve their investments further.

The council also wanted the government to send a positive signal to foreign investors by allowing regular and trusted clients of the Foreign Investment Review Board to have access to a fast-track approvals lane.

A spokesperson for the Department of the Treasury said the federal government did not comment on budget speculation.