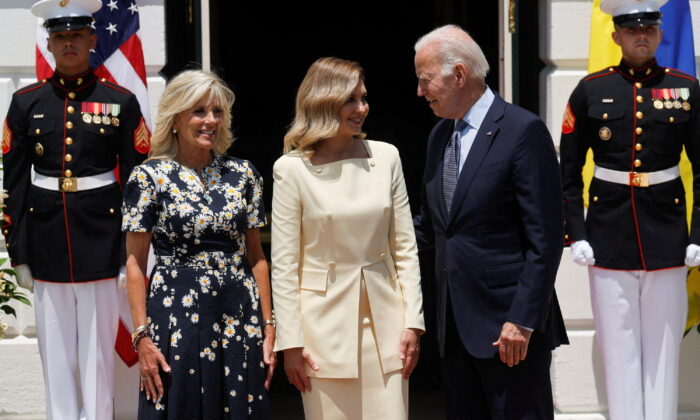 WASHINGTON—U.S. President Joe Biden, with flowers in hand, and First Lady Jill Biden welcomed Ukraine’s first lady, Olena Zelenska, to the White House on Tuesday for a visit ahead of her address to Congress on Wednesday.

Zelenska, the wife of Ukraine President Volodymyr Zelenskyy, embraced Jill Biden and received the flowers from the president, who met her vehicle outside.

Afterwards, the two women and delegations from both countries sat down for a meeting in the White House Blue Room.

Jill Biden had made a surprise visit to Ukraine, which Russia invaded on Feb. 24, in May, visiting her counterpart and a school that was sheltering displaced Ukrainians.

Zelenskyy later said he expected “significant results” from his wife’s meetings in Washington.

Her tasks include increasing U.S. support for Ukraine, obtaining additional support to “protect people from Russian terror” and boosting humanitarian assistance, he said in a late-night video address.

He said the address to Congress would be important, adding “I strongly believe it will be heard by those people responsible for making decisions in the United States.”

Russia calls its action in Ukraine a “special military operation” to ensure its own security. Zelenskyy has led his country in standing up to Moscow.

“When I came back, one of the things that I said was, you cannot go into a war zone and come back and not feel the sorrow and the pain of the people,” Jill Biden said at the beginning of their meeting.

She said she had spoken to her team about helping address mental health issues for mothers and children who have suffered atrocities.