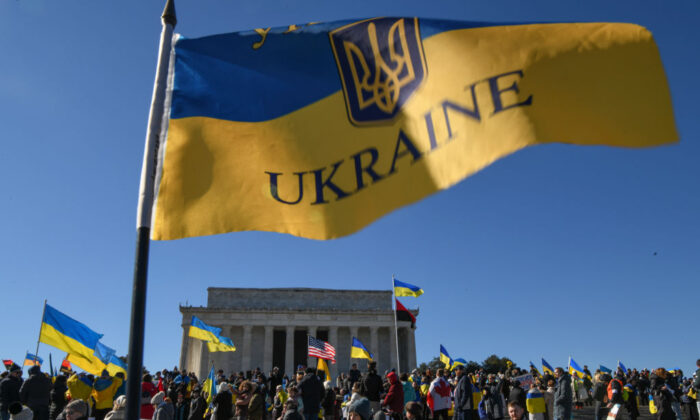 Demonstrators gather at the Lincoln Memorial to stand in solidarity with Ukraine and protest against the rising tensions between Russia and Ukraine before marching to the White House in Washington on Feb. 20, 2022. Attendees called for President Joe Biden to take a stronger stance on deterring Russia from invading Ukraine and demanded the end of Russia's occupation of Crimea. (Kenny Holston/Getty Images)
Viewpoints

So I guess sending Kamala Harris to Europe in order to prevent Vladimir Putin from attacking Ukraine didn’t work.

All the pundits are amazed.

Still, to war or not to war, that is the question.

Among the many brilliant things that Winston Churchill said, his observation that “To jaw-jaw is always better than to war-war” ranks up toward the top of his wisest declarations.

Not everyone sees it that way.

The neo-con war machine is in a state of high excitement at the prospect of getting the band back together again.

Maybe Ukraine can be the new Afghanistan? Wouldn’t that be nice?

Occupy a distant country for a couple of decades, accomplish nothing, but spend several trillions of dollars while lining all the right pockets.

Can they do it again?

But it’s worth noting that it’s not only the old neo-con war machine that is beating the war drum. In addition to the Cheney–Boot–Kristol Russia! Russia! Russia! chorus, there are other forces at work.

Once a week now, it seems, Joe Biden tells us that Putin is just about to invade Ukraine. Really, it will be any minute now.

Biden named the date, but Vlad stood him up.

Feb. 16 came and went, but there were no Russian tanks rolling over the Ukraine border, notwithstanding “intelligence reports” to the contrary.

Digression: How long are we going to denominate the disinformation peddled by the CIA, the NSA, and the rest of our expensive alphabet soup apparat “intelligence”?

There is nothing “intelligent” about it, or them. They are malign, yes. Incompetent, without a doubt. Mendacious, to a fault. But intelligent? I don’t think so.

The suits running our lives should just give it up and do what they were going to do anyway, without rationalizing their thoroughly irrational behavior as something undertaken because of secret “intelligence.”

The whole Ukraine wheeze reeks of political theater, not to say vaudeville.

I say this despite the fact that Vlad finally got around to undertaking that “minor incursion” into his southern neighbor.

After all, Biden basically said that a “minor incursion,” just a little nip, would be OK with him.

At the moment, with Putin recognizing the independence of some separatist bits of Ukraine, that seems to be the extent of his operation.

And here’s a question:

Does Putin want the rest of Ukraine?

He already has the prize bit, Crimea.

The rest of the country is a corrupt backwater.

According to the Economist’s 2021 Pocket World in Figures, Ukraine has a life expectancy that is worse than that of Bangladesh.

Its population is declining.

The fertility rate is 1.4, which is Black Death/war/famine territory.

No, Ukraine is no prize.

It’s a failed state, thoroughly corrupt, just barely rich enough to line the pockets of Hunter Biden to the tune of $50,000 per month, and provide Joe Biden with an opportunity to play the heavy by getting a prosecutor cashiered who was investigating a company on whose board Hunter sat.

Tucker Carlson got it just right when he said Ukraine isn’t a democracy but “a client state of the Biden administration.”

Does Putin want it anyway?

I have no idea.

But you can’t listen to spokesmen from the administration, from slurring Joe Biden on down, without recognizing that there is a lot of theater being disseminated.

But what can that mean? Are we going to send troops to Ukraine?

Maybe he thinks the United States is going to invade Russia?

Joe Biden took a deep breath and read these words from the teleprompter: “Make no mistake, the United States will defend every inch of NATO territory with the full force of American power. An attack against one NATO country is an attack against all of us.”

OK. But here’s the thing, Joe. Ukraine isn’t a member of NATO.

Hence all the talk about invoking “Article 5,” which commits all NATO members to support other members if attacked, is utterly beside the point.

I leave out of consideration the question of the relevance of NATO, an alliance born in the early years of the Cold War, in 2022.

With the death of the Soviet Union, the development of the European Union, and the diminution of U.S. power, has it not outlived its raison d’être?

That’s a question for another day.

But what’s really going on with the nonstop talk about Russia and Ukraine?

One, Putin is playing with Joe Biden.

And how he must be enjoying it.

Maybe Putin will eventually break off even more pieces of Ukraine for Russia.

But he has plenty of domestic problems and doesn’t want Russian soldiers coming home in body bags.

Nor does Germany–which gets more than 50 percent of its energy from Russia–want a conflagration on its doorstep.

The second thing that’s happening, I think, is a little Wag-the-Dog drama designed for domestic consumption.

According to the puppets, this might be the biggest war in Europe since World War II!

Gen. Mark “White Rage” Milley: A Russian invasion of Ukraine would be “horrific.”

Has there ever been a convocation of such clueless incompetence? I merely ask.

Act II: After a nonstop media barrage warning that a Russian invasion of Ukraine is imminent, the markets react. The Dow loses a couple thousand points, gloom spreads.

Act III: The U.S. administration says “there is still time for diplomacy.”

Biden claims victory as the man who restored the peace.

But here’s the context.

No one in America cares about the territorial integrity of Ukraine, a country that has deep historical ties to Russia.

Many people in America care about the territorial integrity of the United States, which is being egregiously violated daily by the collapse of our Southern border.

Then there are the 76,000 “evacuees” from Afghanistan that the comically named Department of Homeland Security has just released into the United States. How many are aspiring jihadists? We will find out soon enough.

Meanwhile, inflation is through the roof.

Supply chain problems have made many ordinary consumer goods, from groceries to washing machines, scarce.

COVID hysteria continues to plague the country, even as the plague of COVID is evaporating faster than you can say Dr. Anthony Fauci.

The Democrats have a date with defeat in the November elections.

Even Democratic pollsters expect it to be a blowout.

Biden’s minders hope that by shouting “Russia” and “Ukraine” often enough, and loud enough, they can distract the electorate.

I don’t think it will work, but let’s see.