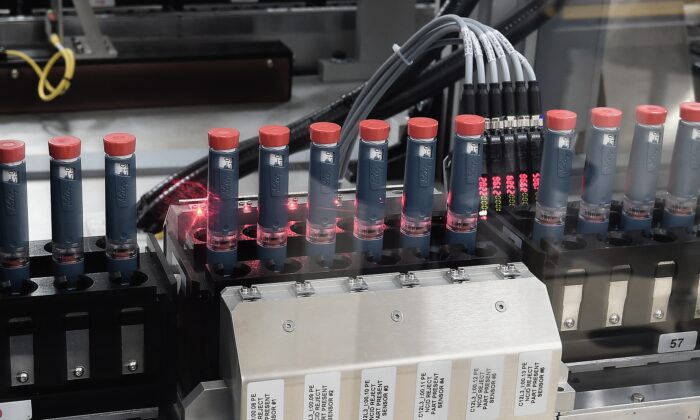 A unit dedicated to the production of insulin pens at the factory of the U.S. pharmaceutical company Eli Lilly in Fegersheim, eastern France, on Oct. 12, 2015. (Frederick Florin/AFP via Getty Images)
Thinking About China

It’s leveraging $2 billion to turbocharge the bioeconomy in the United States for a market expected to add tens of trillions of dollars in value over the coming years.

“Global industry is on the cusp of an industrial revolution powered by biotechnology,” according to a White House fact sheet accompanying President Joe Biden’s executive order on advancing biotechnology and biomanufacturing innovation for a sustainable, safe, and secure U.S. bioeconomy. “Other countries are positioning themselves to become the world’s resource for biotechnology solutions and products.”

Biden wants the United States in the lead on biotech and is trying to speak to his voters’ minds to get there. His fact sheet details biotech initiatives to “lower prices, create good jobs, strengthen supply chains, improve health outcomes, and reduce carbon emissions.”

“The United States has relied too heavily on foreign materials and bioproduction, and our past off-shoring of critical industries, including biotechnology, threatens our ability to access materials like important chemicals and active pharmaceutical ingredients,” according to the fact sheet.

That’s true. More than 70 percent of drug manufacturing facilities registered with the Food and Drug Administration are foreign. A full 13 percent are in China, which produces 42.4 percent of the world’s exported antibiotics.

In an emergency, those antibiotics could be difficult to access, costing American lives. The United States, therefore, is too dependent on China, including its bioeconomy.

“Yet, bioeconomy remains an American strength—as well as a huge opportunity—given our industries, our innovators, and our robust research enterprise,” the Biden administration wrote. “By responsibly harnessing the full potential of biotechnology and biomanufacturing, we will be able to realize the potential of biology that can make almost anything that we use in our day-to-day lives, from medicines to fuels to plastics, and continue to drive U.S. innovation into economic and societal success.”

Chinese state media denounced the initiative, claiming it targeted China and expanded decoupling from the computer chip industry to the biotech sector.

“Although the statement did not mention China, it is widely believed that the executive order aims to reduce the US’ reliance on China for medicines and chemicals,” the Global Times reported.

One of the most famous examples of genetic engineering is the splicing of human genes into bacteria for the production of insulin, which was previously harvested from farm animals. The genetically modified insulin is cheaper to produce and reduces the risk of allergic reactions in patients.

Synthetic biology goes beyond the splicing of natural genes, to the printing of synthetic DNA of any sequence. It can create useful biological products by using human-invented artificial DNA to farm proteins that detect, for example, lead in water, or produce pheromones to attract insects as part of pest control. It could be used to mass-produce meat and milk, thus decreasing greenhouse gases, as well as biopharmaceuticals, pigments, or spider silk (five times stronger than steel by weight).

Synthetic biology has created new organisms such as synthetic yeast, synthetic bacteria, and synthetic viruses (to defeat cancer or E. coli, for example).

Bioengineering can produce biochemicals and biofuels and could eventually “account for more than a third of global output of manufacturing industries before the end of the decade—almost $30 trillion in terms of value,” according to the White House.

China would like as much of this market as it can get. Beijing is pushing its bioeconomy, aiming to expand it to $3.28 trillion in the next three years.

Given the threats from the Chinese Communist Party, however, Biden’s executive order rightly reveals elements of decoupling. It includes risk mitigation language, including against the theft of U.S. biological data and biotech innovation, and risks from dual-use research, pathogens, pandemics, and “foreign adversaries” (for example, Russia and China developing bioweapons).

Unfortunately, the initiative lists no mitigation measures for its increased risk of inflation, redundancy, uneven funding, reduction of market solutions, and persistent executive order end-runs around Congress that, over decades, result in the concentration of power in the executive branch of government.

The order is a form of industrial policy, using subsidies to promote a particular industry. But it’s silent on the need for matching tariffs and export controls by the United States and allies on biotech products and science.

The United States’ bioeconomy must become stronger and more independent, and the executive order is a step in the right direction. But the order should more thoroughly address not only new biotech expenditures, but how to protect them from our biggest geopolitical threats.