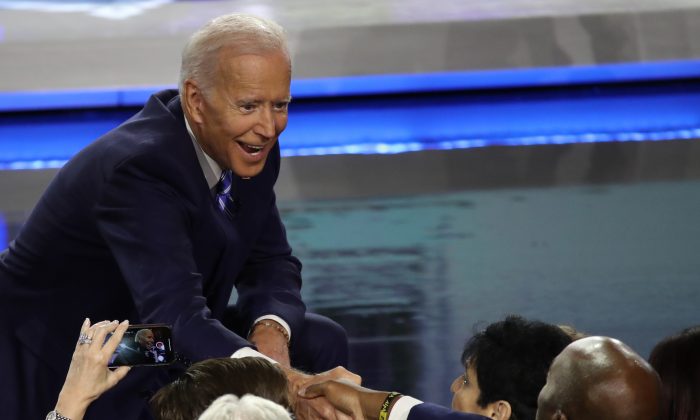 Support for former vice president Joe Biden shrunk in the aftermath of the Democratic presidential debates, data from a new CNN poll revealed.

The poll (pdf), released on July 1, found 22 percent of registered Democrat voters or Democratic-leaning independents backed Biden’s White House run, marking a 10 point decline for him since the last CNN poll conducted in May.

At the same time, Democrat support for Sen. Kamala Harris (D-Calif.) and Sen. Elizabeth Warren (D-Mass.) increased after the second night of debates, as the race for the 2020 nomination appeared to get tighter.

Harris received a 9 point increase in the new poll, reaching a total of 17 percent, while Warren had an increase of 8 percent, totaling 15 percent support. The study was conducted for CNN via telephone by SSRS, an independent research company who interviewed 1,613 respondents.

According to the new data, Biden’s lead shrunk to a narrow 5 percent, with Harris right behind him.

Of those who watched or followed news coverage, 41 percent said Harris performed the best in the debates. Meanwhile, only 10 percent said Biden did the best job, according to the CNN poll.

During the debate, each of the ten candidates agreed that their government healthcare plans would cover illegal aliens.

In a separate show-of-hands question, all but one candidate raised their hands when asked—if elected—if they would decriminalize illegal border crossings. The virtually uniform stance on the two questions is a signpost of where the Democratic field stands on the issue of immigration.

In separate speeches, the candidates also expressed support for undoing all of President Donald Trump’s actions on immigration, including restoring the status of illegal aliens under the Deferred Action for Childhood Arrivals program.

Biden still holds a clear lead over the rest of the Democratic field based on an average of polls maintained by RealClear Politics. He has nearly double the support of Sanders and is 16 points ahead of Warren. Harris was just behind Warren in the average of polls.

Biden raised $6.3 million in the first 24 hours of his 2020 presidential campaign. The 76-year-old brought in the bulk of that haul through smaller contributions, his campaign spokesman TJ Ducklo wrote on Twitter at the time, with 97 percent of those donations under $200.

The former vice president’s campaign has been marred by allegations from women who said that Biden made them feel uncomfortable when he allegedly touched them inappropriately at political events in the past.

A key fundraiser for Biden, Tom McInerney, a San Francisco based attorney, told his campaign on June 20 that he would no longer help the presidential candidate with fundraising for his campaign.

In a statement to CNBC, McInerney said, “I had actually let the campaign know I’d pulled back my support of Biden for now.”

He added that he didn’t think Biden “did well” during the Democratic presidential debate, while reflecting on his performance on the evening of June 27.

Hunter Biden, the son of the 2020 candidate, recently admitted that he helped to set up a meeting with a Chinese tycoon and his father when they traveled to China in 2013.