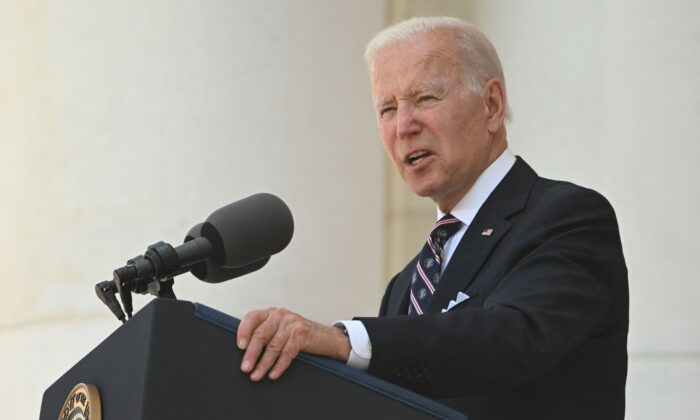 As Americans bear the brunt of a sagging economy, the Biden administration appears to be framing this as a good thing, believing citizens will be better off in the future if current supply shortages and high gas prices spiral out of control.

The United States, according to President Joe Biden, is in the midst of an “incredible transition”—one that will pave the way for a green economy.

While the administration may tout the benefits of a sustainable future, the question remains as to what will happen to average Americans while this “transition” takes place.

More importantly, what’s the endgame of all this that Americans don’t know about?

Biden, during a May 23 joint press conference in Japan with the country’s Prime Minister Kishida Fumio, used the word “transition” to seemingly admit that soaring gasoline prices are just part of his administration’s overall plan for moving from hydrocarbons to renewables.

“When it comes to the gas prices, we’re going through an incredible transition that is taking place that, God willing, when it’s over, we’ll be stronger and the world will be stronger and less reliant on fossil fuels when this is over,” Biden said.

The comment seems to suggest that ensuring the country’s gas supply isn’t high on Biden’s agenda, although the administration did announce the release of 1 million barrels of crude oil a day for six months between May and August.

“The pain at the pump every #NY21 family feels is a direct result of Joe Biden and House Democrats’ Far-Left agenda,” Stefanik wrote on Twitter.

Sen. Rick Scott (R-Fla.) also took exception, writing on Twitter that “the only ‘incredible transition’ we want from Joe Biden is his transition to retirement.”

“Every family in America is paying record-breaking high gas prices thanks to @JoeBiden’s war on American energy—but the president doesn’t care,” he added.

A day before the press conference, Biden’s top economic adviser, Brian Deese, told Fox News that the U.S. economy “is in a period of transition,” when he refused to directly answer a question on whether the economy is entering a recession.

“We’re moving from the strongest economic recovery in modern history to what can be a period of more stable and resilient growth,” Deese said.

On May 1, Samantha Power, head of the U.S. Agency for International Development (USAID), told ABC that fertilizer shortages—caused by Russia exporting less fertilizer presented farmers a chance to “hasten transition” from fertilizer to “natural solutions,” such as manure and compost, a change that farmers would need to “make eventually anyway.”

“So never let a crisis go to waste,” Power said.

Looking at the whole picture, it seems more and more the case that the Biden administration officials are just letting these different economic problems happen on purpose, believing that as these crucial resources collapse, Americans will be led to a world of green alternatives.

But such a “transition” is no laughing matter, since these economic problems look set to produce real-world pain. The gas crisis and fertilizer shortage are contributing to a global food crisis, and these and other factors could soon lead to actual mass death.

The current wheat supply crunch is a case in point. On May 19, Sara Menker, the CEO of New York-based agriculture analytics firm Gro Intelligence, told the U.N. Security Council that the world had only about 10 weeks of wheat supply left in storage.

“I want to start by explicitly saying that the Russia–Ukraine war did not start the food security crisis. It simply added fuel to a fire that was long burning,” she said. “It is important to note that the lowest grain inventory levels the world has ever seen are now occurring while access to fertilizers is highly constrained.”

Meanwhile, diesel prices in the United States have jumped more than 70 percent from a year ago. Further price increases could dampen the economy since diesel is used in everything from cargo ships, to freight trucks, to farming machinery.

The Biden administration has spoken enthusiastically about a future with clean energy, such as when Vice President Kamala Harris in March spoke of a world without hydrocarbon emissions.

“Imagine a future: The freight trucks that deliver bread and milk to our grocery store shelves and the buses that take children to school and parents to work; imagine all the heavy-duty vehicles that keep our supply lines strong and allow our economy to grow—imagine that they produced zero emissions,” Harris said during an “Accelerating Clean Transportation” event.

“Clean transportation can bring significant cost savings for the American people as well,” Buttigieg said. “Last month, we announced a $5 billion investment to build out a nationwide electric vehicle charging network so the people from rural to suburban to urban communities can all benefit from the gas savings of driving an EV.”

Taken together, whether it’s with food or with gas, it seems as though many people within the Biden administration are pretty clear about what they’re trying to do.

They don’t appear to be willing or interested in fixing things, when it comes to the things that Americans all worry about.

Rather, it seems as though they’re planning for this—a transition to a green future, to the system that they want.