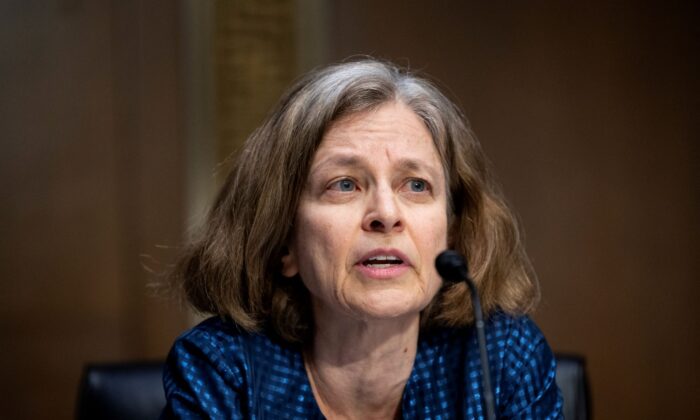 Sarah Bloom Raskin, nominated to be vice chairman for supervision and a member of the Federal Reserve Board of Governors, speaks during a Senate Banking, Housing and Urban Affairs Committee confirmation hearing on Capitol Hill in Washington, D.C., U.S. on Feb. 3, 2022. (Bill Clark/Pool via Reuters)
Inflation

The Federal Reserve’s inflation fight should be its top priority, President Joe Biden’s nominees to the central bank’s Board of Governors told lawmakers on Thursday, signaling support for a hawkish pivot in U.S. monetary policy that’s already well underway.

The nominees’ broad backing of the Fed’s bid to bring inflation under control was largely in line with the direction signaled by Fed Chair Jerome Powell, whose renomination banking panel members from both sides of the aisle have said they will support.

The panel is set to vote on all five of Biden’s Fed nominees, including the renomination of Powell and the elevation of Governor Lael Brainard to the vice chair spot, on Feb. 15, with a vote in the closely divided full Senate to follow sometime thereafter.

The Fed is preparing to raise interest rates next month for the first time since cutting them to near zero about two years ago to shield the economy from the effects of the global coronavirus pandemic.

While the Fed’s goals are “equally” maximum employment and price stability, the clear need now is to bring inflation down from its highest rate in four decades and back toward the Fed’s 2 percent target, Jefferson said.

“So in this moment … the inflation rate is high relative to the Fed’s target and so the directive is clear,” Jefferson, an economist and currently dean of faculty at Davidson College in North Carolina, told lawmakers. “The Fed must take steps to bring inflation back in line with its target.”

“Everyday Americans are suffering from high inflation,” said economist Lisa Cook of Michigan State University, adding that this suffering is what motivates her, even as she emphasized her policy views would be data-dependent. “I agree with the Fed’s path right now as we’re speaking, but when we get to a decision point I would look to the data, the evidence, that would be made available at that time.”

Raskin used her prepared remarks to call inflation a top priority for the Fed, but she spent most of her time during the hearing making the case that she will stick within the Fed’s regulatory mandate and while she believes banks need strict oversight, it is not her job to tell them how and where to lend.

Cook and Jefferson got far fewer questions from lawmakers, but said that if confirmed their policy views will also be shaped by the Fed’s mandate, the data, and discussion with their fellow policymakers, all points that Fed policymakers regularly underscore as they describe their decision-making.

“In times of uncertainty… we have to be patient with the data,” said Cook. “I would make sure that I pose questions of the data we were receiving and engage with the deliberations with my colleagues with an open mind if confirmed.”

“The way in which the Fed, within its authorities, can best improve the recovery from the pandemic for low-wage workers is to stick to its dual mandate, which is to keep a focus on maximum employment and stable prices,” Jefferson said.

Pat Toomey, the top Republican on the panel, led the charge against Raskin, who of all the nominees appeared to be the least likely to win support from a majority of the panel. Toomey said he would support Jefferson’s nomination, but said he was “very disappointed” with Cook’s responses on the inflation challenge, saying they lacked “clarity.”

John Kennedy, another Republican, said he would support both Jefferson and Cook.