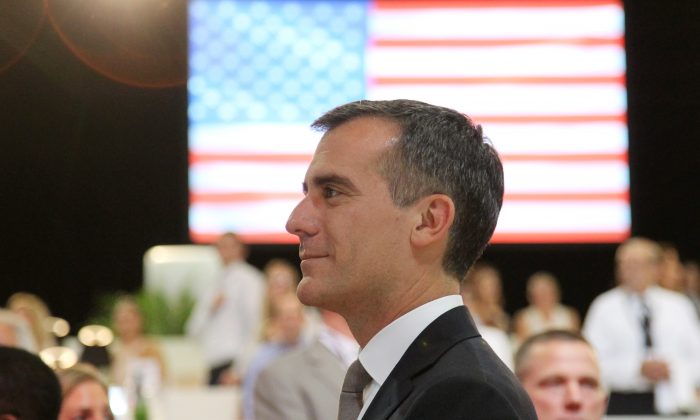 LOS ANGELES—Members of the Los Angeles City Council voted to draft an ordinance raising the minimum wage from $9 to $13.25 by 2017. This supports L.A. Mayor Eric Garcetti’s plan, which he has been pushing since Labor Day this year.

The City Council also requested a study on how to raise it to $15.25 an hour by 2019, which would be the highest in the country if approved. Garcetti’s original proposal was to tie the minimum wage to the Consumer Price Index, a statistic used to measure inflation.

Vice President Joe Biden met with Garcetti, Congress members, and business leaders on Tuesday in a private roundtable discussion about the minimum wage.

“Too many parents can’t get home to help their kids with their school, because they’re working two or three jobs,” said Garcetti during opening remarks at the L.A. Baking Company in the historic Lincoln Heights area of Los Angeles.

The Obama administration in February raised the minimum wage for federal workers from $7.25 to $10.10 in 2015 and supports doing the same for all American workers.

“No one in America should be working 40 hours a week and living below the poverty level. No one,” said Biden.

However, some business leaders, including the L.A. Chamber of Commerce, are against raising the city’s minimum wage because they say it will lead to job losses. If employers have to pay their employees more, they might not be able to afford as many staff.

Biden dismissed their concerns, saying that people with higher wages will spend more, which will benefit the economy and create jobs in the long-run.

An employee who has worked at the L.A. Baking Company for two years says she gets paid slightly above minimum wage. However, she doesn’t think the increase in minimum wage will affect her much, since she believes it will make the cost of living go up as well.

“Living in California, it’s always going to be the same. Even if you get paid more, you pay more,” said Veronica Dill.

The L.A. City Council already voted to raise the minimum wage for some hotel workers to $15.37 an hour starting July 1, 2015.