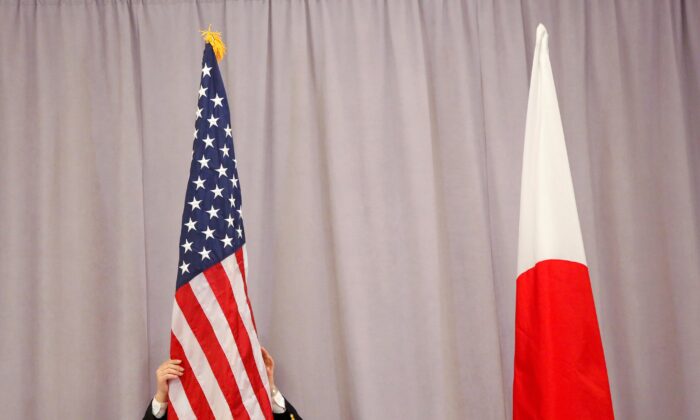 TOKYO/WASHINGTON—Japanese Prime Minister Yoshihide Suga and U.S. President Joe Biden will highlight Tokyo’s central role in Washington’s strategy to counter the challenge of an increasingly aggressive Chinese regime at a summit on Friday.

While that emphasis on Japan’s key status will be welcome in Tokyo, where some politicians are pushing for a tougher stance towards Beijing, it also raises questions about how far Tokyo can go to meet demands on regional defense and human rights.

“This will be the precursor to a series of meetings among like-minded countries to send the right signal to Beijing,” Kunihiko Miyake, an adviser to Suga, told Reuters.

The Chinese Communist Party (CCP) has increased maritime activities in the East and South China Seas and near Taiwan. Rights concerns have deepened over the treatment of Muslim Uyghurs in China’s Xinjiang region. Washington says Beijing is perpetrating a genocide.

Suga will be the first foreign leader to meet Biden in person since the president took office, something that could give Suga a boost ahead of a general election this year.

“Asking Suga to meet the president first means a lot—that China competition is critical and who is the best partner? Japan,” said Toshihiro Nakayama of Japan’s Keio University.

“That also means that Japan has to do more.”

Suga told reporters before leaving for Washington he hoped to strengthen the alliance based on the shared values of freedom, democracy, human rights and rule of law, show the two countries’ leadership in creating a “free and open Indo-Pacific” and build a relationship of trust with Biden.

Marc Knapper, the senior official for Japan and Korea at the U.S. State Department, said issues that would be “front and center” in the discussions included “China’s unilateral attempts to change the status quo in the East China Sea, South China Sea; what’s happening within China, and…around China, Taiwan, Hong Kong.”

He told an event at Washington’s Center for Strategic and International Studies there would also be discussion of North Korea’s nuclear missile program, which threatens both Japan and the United States, and ways to address “existential issues of our time, climate change, clean energy, COVID-19.”

Japan is grappling with rising coronavirus infections with fewer than 100 days from the planned start of the Summer Olympics in Tokyo.

In a statement after a March meeting of U.S.-Japan defense and foreign ministers, the two sides “underscored the importance of peace and stability in the Taiwan Strait” and shared “serious concerns” about human rights in Hong Kong and Xinjiang.

The United States, the European Union, Britain and Canada have imposed sanctions on Chinese officials for alleged abuses in Xinjiang and some Japanese lawmakers think Tokyo should adopt its own law allowing it to do the same, while Japanese executives worry about a backlash.

Japanese officials were divided over whether Suga should endorse a strong statement on Taiwan, despite U.S. urging, or Xinjiang, two Japanese ruling party lawmakers familiar with the discussions said.

A Japanese foreign ministry official said it was not decided whether there would be a joint statement after the summit.

Asked to comment, a senior U.S. official said: “We would not want Japan to make any statements that they do not fully support.”

Any comments by Suga on either Taiwan or human rights will be closely watched by the Chinese regime, which has warned Tokyo against “being misled” by countries biased against Beijing.

Washington is required by U.S. law to provide Taiwan with the means to defend itself.

While Tokyo has no official diplomatic relations with Taipei, non-governmental engagement has flourished. Some Japanese lawmakers want even closer ties.

The last time U.S and Japanese leaders referred to Taiwan in a joint statement was in 1969, when Japan’s prime minister said maintenance of peace and security in the “Taiwan area” was important for its own security. That was before Tokyo normalized ties with Beijing.

Japan hosts over 50,000 U.S. military personnel and, experts say, would be unlikely to stand idly by in any Taiwan crisis, although many ordinary citizens would probably be wary of entanglement.

By Linda Sieg and David Brunnstrom