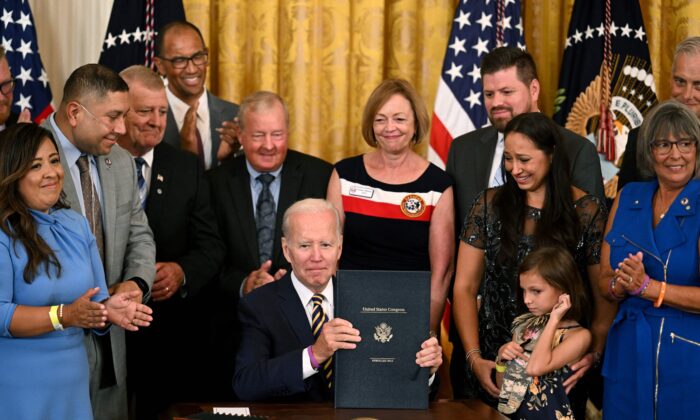 U.S. President Joe Biden displays the enrolled bill after signing the PACT Act of 2022 into law during a ceremony in the East Room of the White House in Washington on Aug. 10, 2022. (Jim Watson/AFP via Getty Images)
Executive Branch

“The PACT Act is the least we can do for the countless men and women—many might be in this room for all I know—who suffered toxic exposure while serving the country,” Biden said in prepared remarks delivered from the White House before signing the legislation.

The legislation was sponsored by Rep. Mark Takano (D-Calif.), chairman of the House Veterans’ Affairs Committee, in the lower chamber and Sens. Jon Tester (D-Mont.) and Jerry Moran (R-Kan.), the chairman and ranking member of the Senate Veterans’ Affairs Committee. The legislation drew bipartisan support in both chambers of Congress. The House approved it in a 342–88 vote in July, and the Senate passed it by an 86–11 margin a week before Biden signed it.

The act expands eligibility for Veterans Affairs (VA) health care for veterans who suffered toxic exposure, in part by establishing “a presumption” that veterans serving in certain locations during specific times were exposed to toxic substances, such as on or after Aug. 2, 1990, in Bahrain.

It also eliminates a requirement to prove exposure to the substances, which supporters of the measure say has meant that many veterans who were exposed haven’t received government care.

Lawmakers have estimated that it will affect more than 3.5 million veterans, including veterans who have served after the Sept. 11, 2001, terrorist attacks.

“With the President’s signature, the PACT Act is finally across the finish line. For generations, toxic-exposed veterans have had to fight our government to get the health care and benefits that they need and have earned. Today, this fight is over,” Tester said in a statement.

Moran said, “Today, we delivered on a promise made to our veterans that if someone serves in our military, we will take care of them and provide them with the benefits they have earned through their service.”

Robinson, for whom the legislation is named, was a healthy soldier with the Ohio Army National Guard who was exposed to burn pits while serving in Iraq, according to his family. He developed lung cancer and later died.

His family was denied VA coverage because the cancer was deemed to be a nonqualifying injury, the family said.

“I would like to thank all members of Congress who supported and voted for the PACT Act, all the veterans’ organizations who help raise our voices on capitol hill, and advocates like Jon Stewart for your support,” Robinson’s widow Danielle Robinson said at the signing ceremony.

VA Secretary Denis McDonough told those gathered that the agency is prepared to implement the legislation.

“We encourage anyone who might be eligible for PACT Act benefits to apply right away because we will stop at nothing to make sure every veteran, every family member, and every survivor gets everything they have earned and they deserve,” he said.

Biden said, “I am urging the veterans of those decades of war to promptly file your claims.”