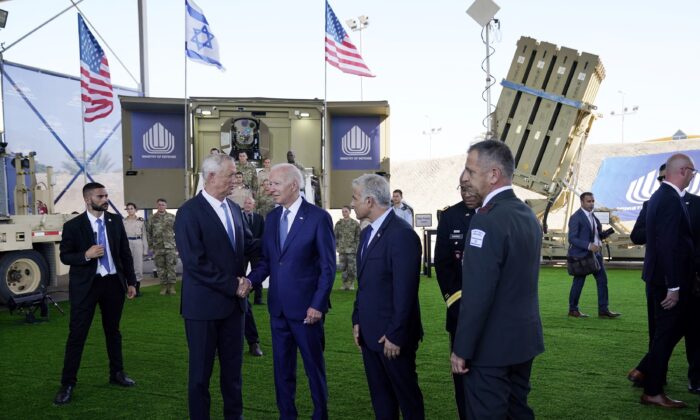 President Joe Biden shook hands with multiple officials and hugged a woman in Israel on July 13, hours after the White House said he’d seek to “minimize contact” with others because of COVID-19 concerns.

He also spoke to the women while crouching in front of them.

Biden did not wear a mask on Wednesday, nor did Israeli officials or others.

“Did you see the president hug me?” Quint asked. “He asked permission to kiss me and he kept on holding my hand and we were told not to touch him.”

“How exactly that plays out in any given interaction is something that we will see unfold,” he added, responding to a query about Biden reportedly planning not to shake hands on his Middle East trip.

Israeli media reported this week that the White House had told Lapid’s office that Biden would refrain from shaking hands during the visit due to the surge in COVID-19 infections in the United States and Israel.

Before Biden travels abroad, White House officials work with host nations to coordinate COVID-19 protocols, including testing for anyone expected to come in close contact with Biden. It’s not a perfect system, as Biden often decides to greet people in large crowds that may not have been universally tested. Separately, everyone traveling in the presidential entourage is required to be tested at least once daily, in addition to any host country protocols.

White House press secretary Karine Jean-Pierre said Biden was going to follow advice from his doctor and “minimize contact” due to the rise of the BA.4 and BA.5 subvariants of the virus that causes COVID-19.

That was a change from a day before, when Biden mingled and shook hands with members of Congress at a White House picnic.

He bumped fists with Israeli officials who greeted him at Ben Gurion International Airport, but later shook hands and hugged people.

During a speech at the airport, Biden said he wanted to reaffirm the “unshakable commitment of the United States to Israel’s security” but also said he supported a two-state solution, or separate countries for “for Israelis and Palestinians.”

After visiting Israel, Biden is scheduled to fly to Saudi Arabia to meet with officials.