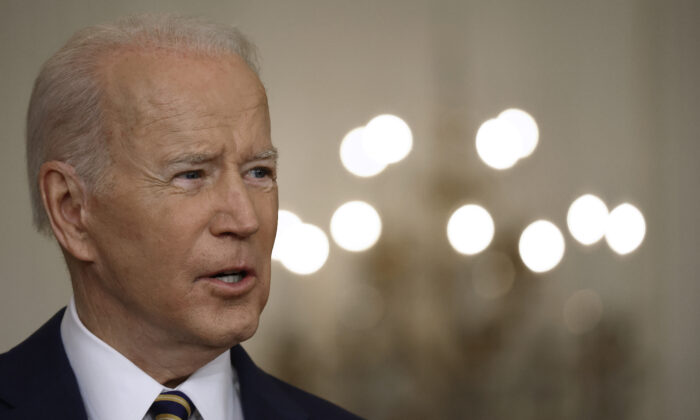 U.S. President Joe Biden talks to reporters during a news conference in the East Room of the White House in Washington D.C. on Jan. 19, 2022. (Chip Somodevilla/Getty Images)
Finance & Business Ties

President Joe Biden said on Wednesday that it was not time to lift U.S. tariffs on Chinese goods because Beijing has failed to keep its promises under the Phase One trade deal.

In 2018, a “Section 301” investigation found that China was engaging in illegal trade practices, including excessive government subsidies and intellectual property theft, which subsequently prompted the Sino-U.S. trade war. The two sides signed the trade deal in January 2020, with China promising to buy at least $200 billion worth of additional U.S. goods and services during 2020 and 2021.

China met just 60 percent of its buying target under the trade deal as of November 2021, according to data compiled by the Washington-based Peterson Institute for International Economics. The U.S. Census Bureau has not released trade data for December 2021.

Biden acknowledged that some business groups were calling for him to lift the tariffs.

“Well, I know that—that’s why my trade rep is working on that right now. The answer is, it’s uncertain,” Biden said, referring to U.S. Trade Representative Katherine Tai.

On Dec. 23 last year, China’s Ministry of Commerce said it hopes that the two sides can expand trade cooperation, when asked about the trade deal at a briefing, according to China’s state-run media.

Some U.S. lawmakers have been calling for the Biden administration to take concrete actions to address Beijing’s failed commitment.

Sen. Rick Scott (R-Fla.), in a letter to Tai dated Dec. 20, doubted Beijing would ever fulfill its purchasing promises given its “track record of lying and cheating.”

“The American people, who’ve been harmed by the Chinese Communist Party’s economic wrongdoing, deserve to know how this administration is holding the Communist Chinese government accountable,” Scott wrote.

Rep. Adrian Smith (R-Neb.), in a column published by his office on Jan. 14, stated that Biden “needs to stop watching and act.”

“We have had some clear wins under the Phase One agreement, but President Biden’s inaction could undo this progress even as we work to build on it,” Smith wrote.

“Two years later, China is nowhere near fulfilling its obligations under Phase One,” Smith wrote. Aside from failing to buy enough U.S. goods, China also “failed to fulfill other commitments like instituting intellectual property reforms,” he added.

“The President’s foreign policy team has done little to take on China, and his administration is producing only outlines for action with no detail. That is not good enough,” he wrote. “Americans and the friends of freedom around the world cannot afford to wait.”