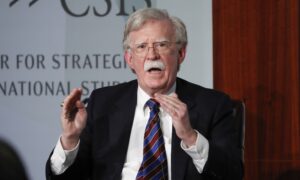 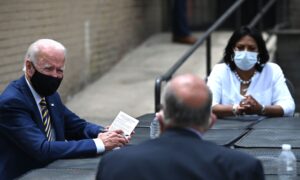 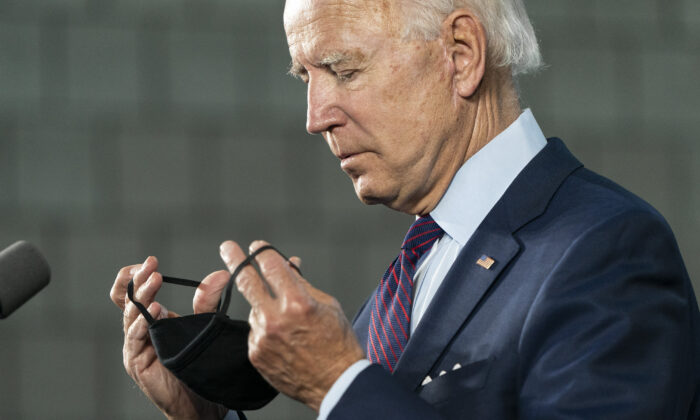 Former Vice President Joe Biden said he’d do everything he could if president to force people to wear masks in public.

“I would go back to making sure that everybody had masks,” Biden, the presumptive Democratic presidential nominee, told KDKA.

“The one thing we do know is that these masks make a gigantic difference. I would insist that everybody in public be wearing that mask. … I would do everything possible to make it required that people had to wear masks in public,” he added later.

Cloth masks “may slow the spread of the virus and help people who may have the virus and do not know it from transmitting it to others,” the health agency says on its website.

Officials for months insisted masks had little effect on transmission of the CCP (Chinese Communist Party) virus, telling people not to wear them unless they were sick or a healthcare worker.

That changed in early April, when a sudden reversal took place.

Officials said the change stemmed from new evidence of transmission from people who weren’t showing symptoms but still had the virus, which causes a disease called COVID-19.

The World Health Organization says limited evidence exists supporting the theory that a healthy person wearing a mask can be beneficial as a preventative measure.

“There is currently no evidence that wearing a mask (whether medical or other types) by healthy persons in the wider community setting, including universal community masking, can prevent them from infection with respiratory viruses, including COVID-19,” the health group said in guidance (pdf) on how and when to use masks.

Biden, 77, has worn a mask every time he’s emerged from his home since the COVID-19 pandemic started, a sharp contrast to President Donald Trump, who has declined to wear one in public.

Trump noted in April that the CDC guidance were recommendations.