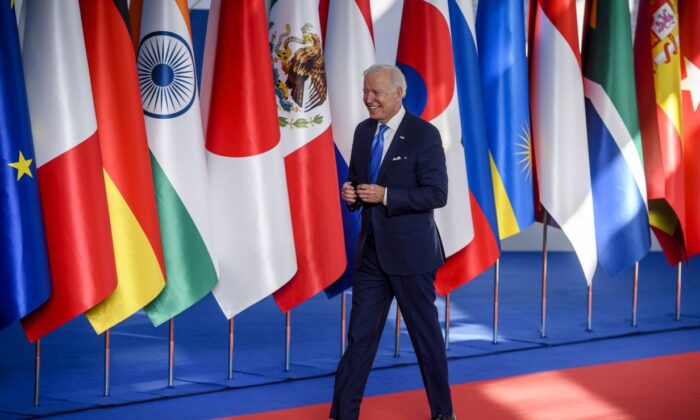 President Joe Biden arrives for the welcome ceremony on the first day of the Rome G20 summit, in Rome, Italy, on Oct. 30, 2021. (Antonio Masiello/Getty Images)
Thinking About China

President Joe Biden is rightly promoting a democracy summit, but has needlessly excluded some American friends and allies, and failed to sufficiently focus on the growing threat from Beijing.

With increasing authoritarianism globally, led by China and its allies, Russia, Iran, and North Korea, the time is right for Biden’s “democracy summit.” The summit, to be held virtually starting on Dec. 9, will encourage countries to improve their levels of democracy at home, but more importantly, will push them to unite against the biggest near-term threat to democracy and human rights on a global level: the Chinese Communist Party (CCP).

China, Russia, Iran, and North Korea are not invited, which is good. Democracies and their allies need somewhere to regroup and rethink the best strategies for defending themselves against these aggressors.

But neither are some other authoritarian countries invited, that have been good allies to the United States and less territorially aggressive. That they are excluded from the democracy summit is a diplomatic snub that makes them easy picking for Beijing and its coterie of rogue dictators.

To put it simply, we need to recognize a continuum of authoritarianism, from better authoritarians who side with the world’s market democracies, and should be rewarded and encouraged for doing so, to worse ones, who side with Beijing. The worse the dictator, the more they should be excluded from all the benefits and privileges of respected membership in the international system.

Beijing is aggressively moving to divide the world’s countries into those who support it, as proven by their denial of diplomatic recognition to Taiwan, and those who are against it and, therefore, lose access to the world’s biggest market. America fell into this trap in 1971 and got thoroughly stuck there in 1979, and so led its allies in the wrong direction.

The approach following World War II that granted a United Nations Security Council (UNSC) veto to Joseph Stalin, one of the worst dictators in modern history, was a mistake. Likewise, giving a UNSC veto to communist China in 1971 was disastrous. The Soviets and the CCP are using their vetos and other influence in the U.N. to balkanize what should be a stronger and more unified global force for democracy and human rights, as envisioned by the 1948 U.N. Universal Declaration of Human Rights.

We must again ask countries to take sides, but our side should be a politically diverse group of countries that support long-term democratization, versus those that support Beijing’s increasing illiberality on the other.

All countries, including those authoritarian countries that support democratization, will have a chance to democratize over time. Democracies, too, have room for improvement. So it is important to include the “good dictators,” however oxymoronic that sounds, among those that America considers its allies. What matters most in choosing our allies is their long-term and proven intention to democratize and improve human rights globally, along with their demonstrated ability to contribute to the alliance of democracies that is defending the international system from Beijing’s growing power.

The Kingdom of Saudi Arabia, for example, has been a traditional U.S. ally, even though its human rights policies are often atrocious. The Saudis are critical to the energy security of our democratic allies, especially in Europe. The Kingdom has historically been a strong U.S. ally, and counterbalance to Iran, including throughout the Cold War. It would be a loss to the cause of democracy globally to shut Riyadh out of the democracy summit, and thus push the Saudis further into the arms of the CCP.

While this may seem hypocritical, it is the realpolitik necessary to create a sufficiently strong coalition that achieves peace through strength against the CCP, rather than an alliance that is on a superficial level ideologically coherent, but will be weaker as a result and, therefore, more likely to stumble into war. Peace through strength cannot be achieved with a weak and divided alliance system.

Beijing will certainly approach any country excluded from the democracy summit to make the point: America is out to get you, because America is against dictatorship. A too-restrictive guest list thus plays into CCP talking points that could be seen as an own-goal by the Biden administration.

That said, there is also value to clearly stating our goals of democracy and democratization for all countries in the world, over the long term. This mobilizes democracy supporters in countries everywhere, including in China and Russia, who can powerfully leverage their weight from the inside of our adversaries to the long-term goals of democratization. The stated goal, therefore, should be the long-term democratization of countries around the world, not the democracies of today against the autocracies of today. That latter approach would just push the good, or allied autocracies, and democracy supporters in the worst dictatorships into a grudging alliance against the democracies.

The same goes for other authoritarian countries that have reason to side with the democracies against China, including Singapore and Vietnam. Singapore hosts a U.S. naval base, and Vietnam has reason to ally against China because Beijing is attempting to steal its exclusive economic zone in the South China Sea.

While democracies are proud and rightly promote their own more pluralistic form of government, they should also be wise enough to know that they will need to ally with some of the friendlier autocracies in order to effectively defend themselves against Beijing.

For this reason, Biden’s choice of words in June about a competition with autocracies, rather than Beijing, was the opposite of what was needed.

He said, “We’re in a contest, not with China per se … [but] with autocrats, autocratic governments around the world, as to whether or not democracies can compete with them in a rapidly changing 21st century.”

What Biden should have said is that freedom-loving countries around the world, including America and its allies, both democratic and democratizing, are in a competition with the CCP, which seeks to extend its illiberal control globally, to the detriment of all countries that value their independence and sovereignty. The CCP’s goal of global hegemony is ultimately just as threatening to the world’s autocracies, as to the world’s democracies. The CCP, despite its protestations to the contrary, wants to take all of our sovereignties away.

The CCP seeks global hegemony against the world’s democracies and autocracies alike, giving them cause to unite in their defense against Beijing by using the principles found in the U.N. system, including the territorial integrity of all, matched with the 1948 U.N. Universal Declaration on Human Rights. As long as a country, even a dictatorship, is showing some respect for human rights and progressing toward greater levels of democracy and human rights, then they deserve the world’s respect and their territorial integrity.

With this more balanced approach that recognizes a continuum between democracy and autocracy, and a right of territorial integrity that is predicated on the responsibility to provide human rights to all populations in all countries, is found the justification to ally with the friendlier authoritarians against the more illiberal ones that cleave to Beijing. There lies the more effective long-term strategy of advancement toward a world in which all countries of varying and always imperfect political types make progress on democracy and human rights together.