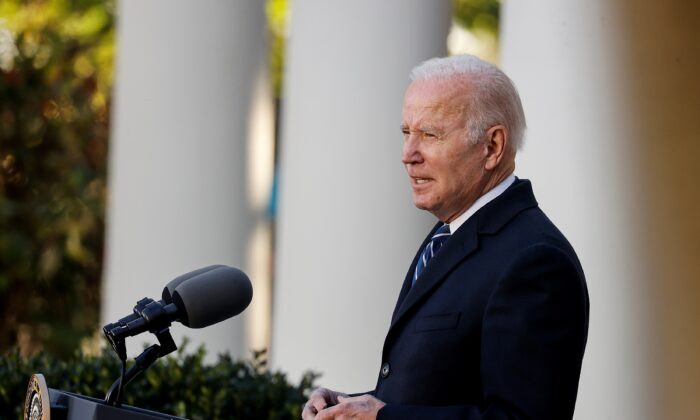 President Joe Biden speaks as he hosts the 74th National Thanksgiving Turkey Presentation in the Rose Garden at the White House in Washington on Nov. 19, 2021. (Jonathan Ernst/Reuters)
Executive Branch

President Joe Biden said he and his wife are mourning the loss of life after a “horrific act of violence” at a Wisconsin Christmas parade that left five people dead and scores more injured on Sunday night.

Authorities on Monday afternoon identified the suspect in the incident as Darrell E. Brooks, 39, who was charged with five counts of intentional homicide. Officials have not released a motive in the case.

“While we don’t have all the facts and details yet, we know that this morning that five families in Waukesha are facing fresh grief, a life without a loved one,” Biden said in an unrelated news conference on Monday.

Biden continued to say that the “people of Waukesha were gathered to celebrate a season of hope, and togetherness and Thanksgiving.”

“This morning, Jill and I and the entire Biden family and I’m sure all of us pray that same spirit is going to embrace and lift up all the victims of this tragedy, bringing comfort to those recovering from the injuries and wrapping the family of those who died in the support of their community,” the president added.

Among the dozens of people injured in the mass casualty incident were 18 children, according to Children’s Wisconsin hospital.

Video footage showed a red SUV plowing through the parade, which included school and community groups.

Police Chief Dan Thompson said Monday there was is no evidence the crash on Sunday was a terrorist attack or that the suspect, Darrell Brooks Jr., knew anyone in the parade.

And according to Thompson, police were not chasing the suspect when he entered the parade route, disputing anonymously sourced media reports that Brooks was trying to evade police capture at the time of the incident. An officer did fire shots to try and stop him, the chief said.

Brooks has two open criminal cases in Milwaukee County. In one case, filed Nov. 5, he is charged with resisting or obstructing an officer, reckless endangering, disorderly conduct, bail jumping, and battery. Records show $1,000 cash bond was posted on Friday.

An attorney representing Brooks in a separate case told The Epoch Times that he cannot comment on the matter because he’s representing him in another case.

It’s not clear if Brooks has an attorney in the Waukesha incident.

CORRECTION: This article has been updated with the correct spelling of victims names. The Epoch Times regrets the error.