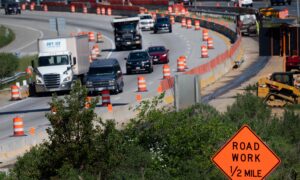 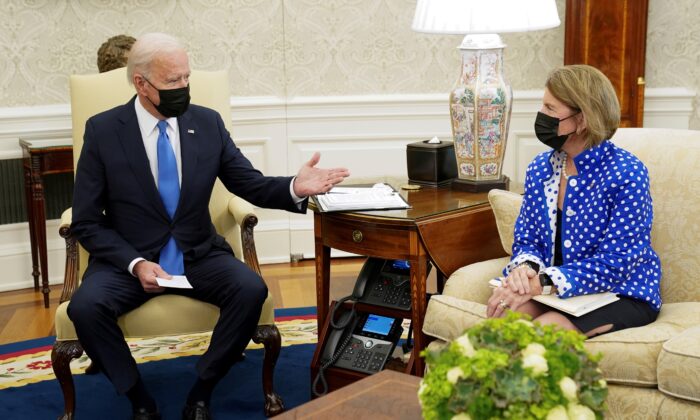 President Joe Biden gestures toward Sen. Shelley Capito (R-W.Va.) during an infrastructure meeting with Republican Senators at the White House in Washington on May 13, 2021. (Kevin Lamarque/Reuters)
Politics

WASHINGTON—President Joe Biden and Republicans entered the weekend sharply at odds over how to craft an infrastructure deal that could satisfy their camps, imperiling the odds of a bipartisan deal.

Biden shot down a new proposal from the main Republican negotiator on infrastructure, Sen. Shelley Moore Capito (R-W.Va.), that increased spending by about $50 billion over their last offer, the White House said.

Biden rejected the offer, saying it “did not meet his objectives to grow the economy, tackle the climate crisis, and create new jobs.”

Republicans had previously offered roughly $257 billion in new spending, short of the $2.25 trillion Biden initially offered and suggested he might bring down to as low as $1 trillion.

And while the two sides agreed to speak again on Monday, the White House also strongly signaled that they may seek a path forward with other Republican lawmakers or even with only Democrats.

“He indicated to Senator Capito that he would continue to engage a number of Senators in both parties in the hopes of achieving a more substantial package,” White House spokeswoman Jen Psaki said in a statement.

Up until now, Capito has been Biden’s primary negotiating partner. Monday’s conversation will be their third in a week.

A Capito spokesperson offered scant detail of what was discussed on the call, saying that they “continued negotiating” and discussed both sides’ views.