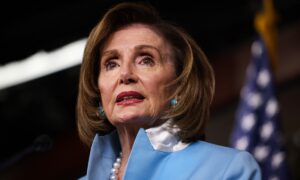 President Joe Biden met with Senate Majority Leader Chuck Schumer (D-N.Y.) and Speaker of the House Nancy Pelosi (D-Calif.) on Thursday about advancing what Democrats are calling their Build Back Better Agenda, including the $3.5 trillion budget reconciliation package which expands the federal government and the smaller $1.9 trillion bipartisan infrastructure bill.

The White House said the three had a “positive discussion.”

“The three discussed their ongoing coordination and outreach around making the case for building an economy that delivers for the middle class, and those seeking to get there, and not just those at the top by passing an historic tax cut for middle-class families and small businesses while cutting the costs of prescription drugs, care for children and older Americans, education, housing, and healthcare while tackling the climate crisis,” the White House said in a readout of the conversation.

“They also reaffirmed that, as we act at this crucial moment to ensure working families are dealt back into our economy, it is only fair that we pay for these tax cuts and investments by repealing the Trump tax giveaways to the wealthiest Americans and big corporations, who often pay little to nothing in taxes,” the readout said.

Pelosi joined the two virtually from England where she traveled this week to participate in the G7 Heads of Parliament Conference, which began Friday, in Chorley, England.

Speaker Pelosi also spoke to students at Cambridge University on Thursday and told them that while the bipartisan infrastructure bill negotiated by Biden with a bipartisan group of U.S. Senators is good, it does not get to the heart of their agenda, which is economic and climate “justice.”

“And it’s a triumph for the President that he got a bipartisan bill, but we have to have much more on climate and the reconciliation bill, or else in my view, we would be in dereliction of duty, to not be thinking of how you build back better,” said Pelosi. “So, again, as I said in my opening remarks. So much of what we do has to be about justice. And with these bills, it’s about economic and environmental justice so we’re very excited about it so that’s what I’m on the phone living with all night.”

Pelosi told the students her committee leaders were given a short timeline to have their portions of the budget reconciliation package written and ready for advancing and they have.

“But we’ve met our goal. Our goal was by September 15 to have our bills written, and they are, and now we just have to reconcile with the Senate, because, they have different rules, and we hope to be on schedule for it all.”

The White House readout also said the three discussed passing a continuing resolution to fund the government before funding runs out at the end of September as well as actions that can be taken to raise the debt ceiling.

Biden has urged Congress to raise the debt ceiling in a bipartisan effort, but Republican leader Senator Mitch McConnell says they will not help Democrats spend money the U.S. does not have, especially since Americans are already feeling the effects of inflation.

“No, Republicans won’t have any input into the massive, reckless taxing and spending spree that will stick middle-class families with higher costs, lower wages, and a socialist country they didn’t vote for,” McConnell said of the Democrats’ $3.5 trillion budget bill. “But Democrats do want Republicans’ help with one thing. They want us to help raise their credit limit to make it happen! They want us to help clear the path for their partisan, job-killing agenda which we oppose.”

He went on to say, “Let’s be clear. The debt suspension that just expired in August automatically covered the borrowing that had accumulated before that date. This is a discussion about the future. This isn’t the last four years when we were reaching bipartisan government funding agreements, bipartisan appropriations, and bipartisan COVID bills. Democrats are making different choices. They want to make policy all by themselves. So, they can come up with the financing on their own as well,” McConnell said.

“The Democratic leaders have every tool and procedure they need to handle the debt limit on a partisan basis, just like they are choosing to handle everything else,” McConnell concluded.

Meanwhile, Democrats say it is both party’s responsibility and that over $5 trillion of that debt was added under former president Trump.

“These are bipartisan responsibilities, especially given that a substantial debt was run up during the previous administration in pursuit of COVID relief and other measures, that received bipartisan support,” the administration said, according to the readout. “Any suggestion by Republicans that they will shirk their responsibility is indefensible.”