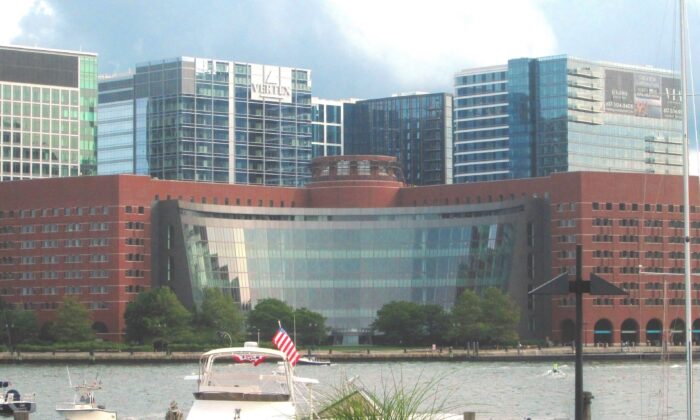 The John Joseph Moakley United States Courthouse in Boston, Massachusetts, home of the U.S. Court of Appeals for the 1st Circuit, on Aug. 11, 2017. Photo by Beyond My Ken, GNU Free Documentation License.
Judiciary

Rikelman’s nomination is likely to encounter opposition in the evenly split U.S. Senate. Left-wing activists are applying pressure to Democratic senators, urging them to accelerate the pace of judicial confirmations out of fear that Republicans will retake control of the chamber after the November elections.

Rikelman currently serves as senior director for the Center for Reproductive Rights, an international abortion defense organization with offices in New York, Washington, Switzerland, Colombia, and Kenya. The group’s mission, according to its website, is to use “the power of law to advance reproductive rights as fundamental human rights around the world.”

She represented Mississippi’s only state-licensed abortion clinic in Dobbs v. Jackson Women’s Health Organization, which the Supreme Court decided on June 24. The court upheld a Mississippi law that bans abortion after 15 weeks of pregnancy and overturned the 1973 abortion precedent Roe v. Wade, returning the regulation of abortion to the states.

During oral arguments on Dec. 1, 2021, Rikelman said, “Mississippi’s ban on abortion two months before viability is flatly unconstitutional,” adding the state wanted the court to dismantle Roe “and allow states to force women to remain pregnant and give birth against their will.”

Erasing or weakening abortion “will propel women backward” and do “profound damage to women’s liberty, equality, and the rule of law,” she said. “Two generations have now relied on this right, and 1 out of every 4 women makes the decision to end a pregnancy.”

Although Rikelman lost in Dobbs, she was successful in another abortion case she argued before the Supreme Court. On June 29, 2020, in June Medical Services LLC v. Russo, the court struck down Louisiana’s Act 620 that required an abortion-providing medical doctor to have “active admitting privileges” at a hospital within 30 miles of where an abortion is provided.

Born in Kyiv, Ukraine, Rikelman immigrated to the United States with her family in 1979, the White House said in a statement. She received her law degree from Harvard Law School in 1997, and previously worked at NBC Universal Inc. as vice president of litigation.

“In the wake of the Supreme Court’s decision overturning Roe v. Wade, Julie Rikelman brings exactly the kind of experience with reproductive rights we desperately need on the courts,” Kang said in a statement.

Mike Davis of the conservative judicial advocacy organization, Article III Project, told Reuters that Rikelman is a bad choice for the federal bench.

“This nominee is a radical, left-wing abortion activist who has no business being on any court, let alone a federal appellate court,” he said.