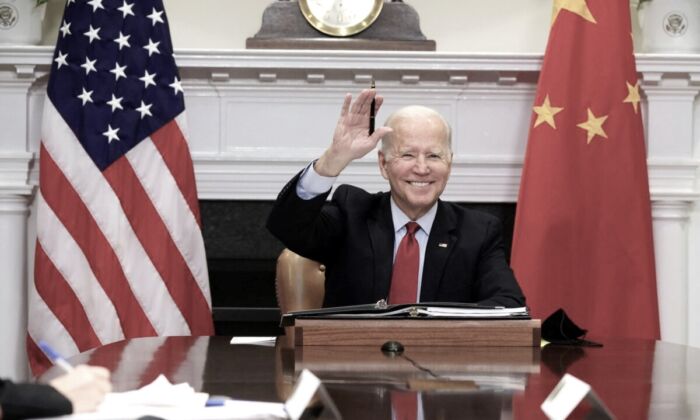 President Joe Biden waves as he participates in a virtual meeting with Chinese leader Xi Jinping at the Roosevelt Room of the White House in Washington on Nov. 15, 2021. (Alex Wong/Getty Images)
Thinking About China

Biden Must Walk His Talk in Asia

Canceling China’s military base in Cambodia would be a start

President Joe Biden reportedly agreed to a meeting with China’s dictator, Xi Jinping, to be held on the sidelines of an upcoming conference in Southeast Asia. One of two upcoming summits in November—the Group of 20 nations (G-20) summit in Indonesia and the Asia-Pacific Economic Cooperation (APEC) summit in Thailand—will be the likely location.

Biden agreed to the meeting in the context of Xi calling him to deliver a warning against House Speaker Nancy Pelosi’s trip to Taiwan. Reportedly, there was a Chinese threat against her air force plane. This raises questions about whether Biden granted Xi the meeting under duress and whether he broadcast American weakness in doing so.

It will likely burnish Xi’s public image and help him gain the third term he seeks at the upcoming Chinese Communist Party (CCP) congress. Conversely, it could make Biden look even softer than he is on China.

In agreeing to the meeting, perhaps Biden wants to get trade with China flowing again to reward his corporate backers. He has been looking for an excuse to remove the Trump administration’s tariffs on China, and a meeting with Xi could be that moment. Any improvement to China’s human rights or decrease in territorial aggression is unlikely under Xi’s leadership.

Biden’s agreement to the meeting thus indicates that he is willing to look past Xi’s genocides, including against Uyghurs and the Falun Gong, and military threats, including against U.S. allies Japan, Taiwan, Australia, India, and the Philippines, to try for minor gains that could ultimately empower Beijing.

While Taiwan and India are not official allies, Biden’s repeated assertions that he would defend Taiwan militarily arguably make it a de facto ally. Likewise, planned U.S.-India joint exercises in the Himalayan mountains near the border with China, and joint membership in the Quadrilateral Security Dialogue (the “Quad”) with Australia and Japan, make the U.S.-India relationship into a de facto alliance.

Biden’s meetings in Southeast Asia, doubtless to include leaders from the region, will be a litmus test as to whether the Democrats can achieve concrete gains against the increasingly powerful regime in Beijing.

Despite significant resistance from both political parties in the United States and U.S. allies closing ranks against the CCP, Xi has demonstrated a stubborn and dangerous pursuit of what Beijing calls its “core interests.”

This core has expanded over the years from the original claims over Taiwan to those in Tibet, Xinjiang, Hong Kong, and Macau, as well as the regime’s authoritarian “development” model. Some ranking officials in China have also called the South and East China seas a core interest of China.

The implication is that, unlike “important” and “secondary” interests, Beijing is willing to go to war over core interests.

Both leaders will be competing for influence among Southeast Asian countries, where they could meet Association of Southeast Asian Nations (ASEAN) leaders from Indonesia, Thailand, the Philippines, Vietnam, Burma (Myanmar), Cambodia, Laos, Malaysia, and Brunei.

ASEAN makes decisions by consensus, and two of those countries—Cambodia and Laos—have traditionally vetoed any proposals, for example from the Philippines and Vietnam, seen to go against Beijing’s interests.

Cambodia has recently gone a step further to allow the People’s Liberation Army (PLA) to start building a military base on Cambodian territory. This should be a particular focus of Biden’s negotiations with not only Cambodia but other ASEAN members that could pressure Phnom Penh, the capital.

The base in Cambodia is the PLA’s second on foreign territory, after one approved by Xi in 2013 in Djibouti, East Africa. The Djibouti base is indicative of how the Cambodia base could be used against the United States and its allies.

The PLA finished construction of the Djibouti base in 2017. The following year, it was used to shoot lasers at a U.S. air force plane, injuring two U.S. airmen. Apparently, the U.S. military did not significantly respond, bringing into question our willingness to retaliate in the face of aggression.

Both Beijing and Phnom Penh have lied about the PLA’s base construction in Cambodia, which is at the country’s Ream Naval Base on the Gulf of Thailand. Chinese military personnel at the base, parts of which are now for the exclusive use of the PLA, have gone so far as to wear Cambodian military uniforms to conceal their presence.

The base will move China toward achieving a network of global bases to support its military power projection. In addition to Cambodia and Djibouti, China is likely seeking military basing rights in Indonesia, Pakistan, Singapore, the Solomon Islands, Sri Lanka, Tanzania, and Thailand.

This network of PLA bases could support its global intelligence collection and offensive operations against the United States and its allies.

In 2021, U.S. intelligence learned that the PLA was secretly building a base in the United Arab Emirates (UAE). U.S. officials were able to pressure Abu Dhabi to halt construction. If Biden is right about the superiority of his foreign policy approach in Asia, he should be able to prove it by getting the PLA’s base in Cambodia canceled as well.

But the opposite is occurring. Perhaps due to China’s increased influence in Cambodia, or because of Democrat foreign policy weakness relative to that of Republicans, U.S.-funded facilities at the Ream Naval Base were demolished, according to a 2021 Pentagon report.

Likewise, a “Joint Vietnamese Friendship” building on the base has been removed to another location so as not to conflict with China. (Vietnam and China are in a relatively tense standoff over Beijing’s increasingly expansive maritime claims in the South China Sea.)

Biden’s trip to Southeast Asia will be a litmus test as to whether the Democrat’s foreign policy is seen as weak relative to the Republicans, or whether Biden’s ally-focused foreign policy can achieve concrete results against China.

Chief among these should be the cancellation of China’s military base in Cambodia. If all of America’s international development funding, Asia-Pacific alliances, and market power as the world’s biggest economy cannot achieve results in Cambodia, what can it achieve under the Democrats?