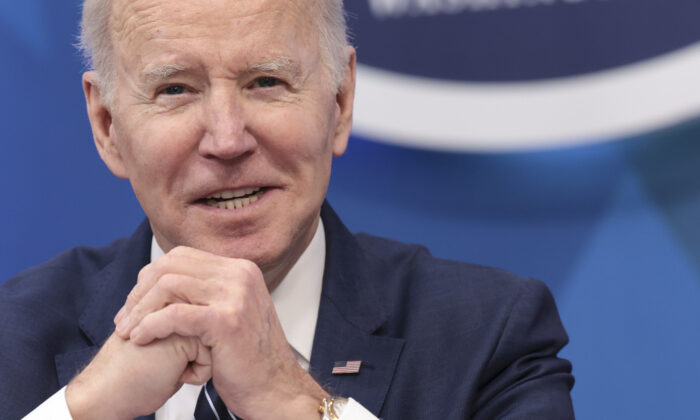 President Joe Biden and other White House officials met with CEOs of leading companies on Monday to discuss Russia’s invasion of Ukraine and what can be done to mitigate the burden of increasing prices on Americans brought about by the war.

Secretary of Treasury Janet Yellen, Secretary of Commerce Gina Raimondo, National Security Advisor Jake Sullivan, Senior Advisor Cedric Richmond, and National Economic Council Director Brian Deese met with the CEOs of 16 major companies to discuss the latest developments on Russia’s invasion of its neighbor, according to a White House readout of the meeting.

Biden was in attendance for part of the discussion, officials said.

White House press secretary Jen Psaki told the press that Biden had “dropped by” for about 20 minutes and “provided them an update on Russia, Ukraine.”

Officials “conveyed the administration’s commitment to continue imposing heavy costs on Putin to degrade Russia’s war machine and support the people of Ukraine, while taking concrete actions to mitigate the price increases on American consumers caused by Putin’s action,” the readout said.

Those in attendance also discussed the “need to work together to address Putin’s disruptions to global markets and supply chains,” particularly in regard to energy—prices of which have risen to 14-year highs following the invasion—and agricultural commodities.

White House spokesperson Emilie Simons told The Hill in an email prior to the meeting that CEOs from Visa, JPMorgan, Bank of America, ConocoPhillips, Marathon Petroleum, and Pattern and Invenergy would be in attendance.

According to the White House readout, both the CEOs and the administration all committed to “close communication and coordination” going forward.

The meeting comes after western nations including the United States have imposed a string of heavy sanctions against Russia targeting the country’s finances and exports, as well as individuals with close ties to Putin.

Several of the companies who attended Monday’s meeting have suspended operations in Russia and shared their support for Ukraine, including oil and gas giant ExxonMobil, which left behind some $4 billion in assets and said it will not be making any new investments in the country.

The United States has also imposed a ban on Russian energy imports which has prompted officials to call on major oil producers to increase output amid concerns that energy prices could be further exacerbated.

In February, oil prices surged above the $100 per barrel mark, reaching 14-year highs after Putin announced the launch of his so-called “military operation” in Ukraine.

On March 11, Biden also announced that he will sign bipartisan legislation that will revoke Russia’s permanent normal trade relations (PNTR) status with the United States, further financially isolating the country and making it harder for Russia to do business with the West.