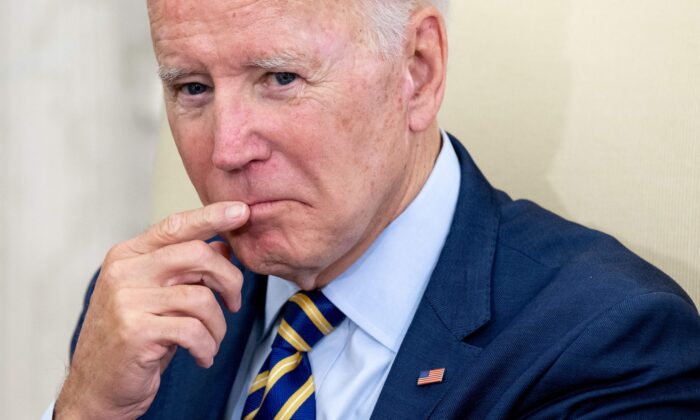 President Joe Biden looks on during a meeting in the Oval office of the White House in Washington on Sept. 16, 2022. (Saul Loeb/AFP via Getty Images)
Business Columnists

Biden Is Truly Clueless About Inflation

While at the airport this week, I bought a 16-ounce bottle of water. The bill: $6. To be sure, this was at an airport, where the elasticity of demand is more vertical. Thirsty travelers are going to pay the bill.

Also, it was Las Vegas, a lovely and exciting town but certainly a place where you want to hold your wallet very tightly. A cocktail at poolside will run you $35 and the breakfast buffet is $70 per person, plus a tip for the person who keeps your water glass full. Not even coffee in your $800 room is free.

In the 1950s to ’80s, Vegas food buffets were famously affordable because casino revenue subsidized them all, but that’s over. Bartenders today tell me that everything in the city is up four times from two years ago.

The sky-high prices don’t seem to be discouraging tourism. The entire city felt like a teeming mob of wild spenders while I was there, with lines to get into the highest-end shops and multitudes playing every slot that was open. It certainly doesn’t seem like a recession here! That guy next to me who lost $5,000 on the craps tables didn’t seem particularly upset but then again, this is how one comports oneself in Vegas: Never let your losses show on your face. Look as if you have money to burn.

Then again, one does wonder. Nationwide, savings rates are crashing below 5 percent, real income is falling, while credit card debt is soaring, at least according to the New York Federal Reserve Bank, which reports “an increase in total household debt in the second quarter of 2022, increasing by $312 billion (2 percent) to $16.15 trillion. Balances now stand $2 trillion higher than at the end of 2019, before the COVID-19 pandemic.”

It seems like this inflationary recession is showing up in two distinct ways: tremendous suffering and carefree financial decadence. After all, with the purchasing power of money in free fall, what precisely is the point of saving? Is there not a financial advantage to getting rid of the paper sooner rather than later? This attitude can show up in consumer and investor pessimism but it can also manifest itself in waves of wild spending as if there is no tomorrow. Inflation always operates as a penalty on long-term planning.

After all, the president of the United States doesn’t seem particularly concerned. In the same interview in which he said that the pandemic was over, he also completely dismissed the inflation problem. It’s the strangest series of muttering. Here is word-for-word what happened:

60 Minutes: “Mr. President, as you know, last Tuesday, the annual inflation rate came in at 8.3 percent, the stock market nosedived, people are shocked by their grocery bills. What can you do better and faster?”

Biden: “Well, first of all, let’s put this in perspective. Inflation rate month to month is just up an inch, hardly at all.”

Biden: “I got that. But guess what we are, we’re in a position where for the last several months it hasn’t spiked, it has just barely. … It’s been basically even. And in the meantime, we created all these jobs and prices have gone up, but they’ve come down for energy.”

The innumeracy of the president here is very convenient. His comments last month that inflation was zero seemed to have become part of his thinking. So, when the next month came along and inflation was up 0.1 percent, he regarded that as just “up an inch.”

He’s oblivious to why inflation has always and everywhere been calculated over 12 months. Doing so provides a much clearer picture than month-to-month trends, in which one month’s dramatic gains can be obscured by another month’s moderate correction.

An analogy would be a 400-pound man on a diet who brags that this morning, he weighed the same as yesterday. He thereby concludes that he doesn’t really have a weight problem. If someone said that to us, we might be polite but, in our heads, we would be thinking that this person is utterly deluded.

Another reason to calculate these figures year-over-year concerns the way that index numbers work. If one big category soars and then falls—as happened to gasoline over the past several months—it can drag down the whole index, even while other categories are moving up. Inflation works this way, migrating from sector to sector.

For example, utility bills (natural gas, electricity, water) currently are rising 14.4 percent year-over-year, a reality which you have undoubtedly noticed. It’s a remarkable shock, and the first thought of consumers is, “Who’s been leaving the lights on or running the air conditioning too cool?” The reality is that the dollar is dramatically declining in value.

Another sector on the rise now is rents, which tend to get lumped in with housing even when the two are diverging in trends. Rental properties are way up, even as housing is under pressure. Such trends characterize every inflation. It never rises and falls like the sea level. It operates more like waves on rocks.

Biden is attempting to calm everyone down—a form of gaslighting. Every consumer is profoundly aware of the shocking price changes over the past two years. What people don’t understand, however, is the grim reality that there will be absolutely no settling back down to where we were.

Even at an authentic zero inflation—calculated over 12 months—that does NOT mean back to normal. It means that the current high prices are now a fixture of reality. In order for prices to return to two years ago, we would need two years of 7 percent DEFLATION. I can promise you that there is absolutely no chance of that happening.

Let’s set the year 2000 at 100 and see where prices are today. Already by 2020, the 2000 dollar was worth only 65 cents. This is the devastating consequence of even seemingly low inflation. But look where we are today: The 2000 dollar is now worth only 57 cents, and is headed much lower, too. By next year, the value of the new millennium dollar will be half of what it was.

That represents a profound hit to living standards.

That Biden would be so dismissive of such a grim trend also is a sign of the grotesque financial decadence of our time. It’s not clear that he cares at all—or even understands. He has no interest in flattening this curve! But maybe that’s OK, some might say, because the Fed is very clearly alarmed and determined to do something about it.

That isn’t correct. The Fed is holding onto 1950s-style Keynesian hydraulics, which prescribes recession as the solution to inflation. What we are getting instead is both at the same time. Driving up the unemployment rate or driving down investment will achieve nothing to preserve the value of the dollar. The value of the dollar is going down because of the $6.3 trillion addition that the Fed made to the money supply as measured by M2. Recession doesn’t reverse that damage; it only adds another layer of suffering.

In 1980, the magic cure for inflationary recession was economic growth, obtained by dramatic policy changes of tax cuts, deregulation, and a new emphasis on getting government out of the way. The exact opposite is happening now, brought about by fanatics who think they are creating a brave new world by unleashing more tax collectors and forcibly converting the entire energy sector to wind and sun from fossil fuels.

You can dismiss my $6 bottle of water as an aberration. More likely, it’s a forecast of what is to come all over the country. There will be no going back to a world of reasonable prices and growing prosperity. We have lost 40 years of economic freedom in a mere two years.

That is taking a toll. That the president seems completely ill-informed or unconcerned about this is something that should concern every citizen.