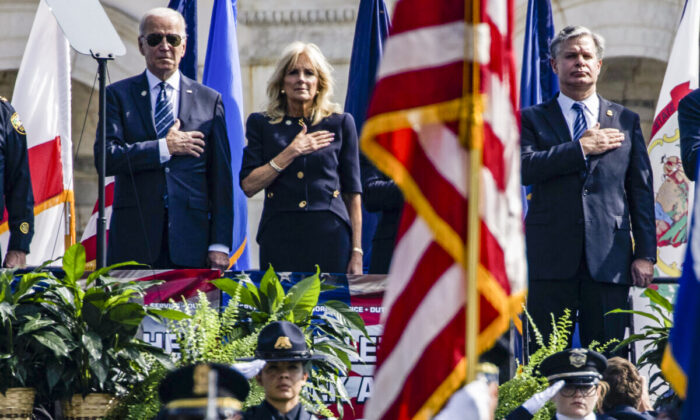 WASHINGTON, DC - OCTOBER 16: (left to right) U.S. President Joe Biden, First Lady Jill Biden, and Federal Bureau of Investigation (FBI) Director Christopher Wray stand during the U.S. National Anthem at the 40th Annual National Peace Officers’ Memorial Service on the West Front of the U.S. Capitol Building on October 16, 2020 in Washington, DC. The memorial service is being held to honor the 491 law enforcement officers who lost their lives in the line of duty in 2019 and 2020. (Photo by Samuel Corum/Getty Images)
Executive Branch

President Joe Biden paid tribute on Oct. 16 to law enforcement officers who lost their lives in the line of duty in 2019 and 2020 during a speech at a national memorial service.

The president said it’s now harder than ever to do the work of policing and more difficult to hire new personnel to fill the void left by those who have fallen.

“It always amazes me how the public doesn’t fully understand what we expect of our law enforcement officers,” Biden said at the 40th annual National Peace Officers’ Memorial Service at the U.S. Capitol. “We expect you to be people ready to stand in the way and take a bullet for us. We expect you to be able to track down the bad guys. We expect you to be the psychologist who talks to the couple that is having a violent confrontation together to step back.

“We expect you to be everything. We expect everything of you. And it’s beyond the capacity of anyone to meet the total expectations. Being a cop today is one hell of a lot harder than it’s ever been,” he said.

“And to the families of the fallen: You’ve suffered an enormous loss. But understand, your loss is also America’s loss. America’s loss. And your pain is America’s pain,” he said. “We’re waking up to the notion that unless we change the environment in which the job can be done, we’re going to have trouble having enough women and men come forward to want to do that job.”

Biden highlighted the law enforcement officers who were involved in the response to the Jan. 6 breach of the U.S. Capitol. The president said 150 were injured that day and that five lost their lives in the aftermath. No law enforcement officer was killed during the incident or has since died as a direct result of injuries incurred on Jan. 6.

“Because of you, democracy survived. But only because of the women and men of the U.S. Capitol Police force, the Washington, D.C., Metropolitan Police Department, and other law enforcement agencies who once again, literally, put their bodies on the line to protect our democracy,” Biden said.

The president also acknowledged that 2020 was the deadliest year for police officers on record. According to a report (pdf) by the National Law Enforcement Officers Memorial Fund, the CCP virus was responsible for more than half of the deaths in the line of duty. A total of 424 officers died in the line of duty in 2019 and 2020, according to the fund.

Biden mentioned several items on his criminal justice agenda. He highlighted the George Floyd Justice in Policing Act, negotiations over which have stalled in Congress. The president said he supports community policing and programs designed to reduce violence before it breaks out.

“At the same time, we have to stop asking law enforcement officers to do every single job under the sun,” Biden said. “I’m committed to investing in mental health services and mental health professionals who can respond to a mental health crisis alongside you. You shouldn’t be the one having to talk someone off the edge of the roof. You should have professional help with you.”

The president also alluded to what he called “the epidemic of gun violence,” saying that state and local law enforcement are working “to keep guns out of the hands of dangerous individuals.” Biden said he wants to make it easier for states to adopt red-flag laws that allow family members and police to petition courts to take firearms from people in crisis.

“He turned down promotions so he could continue to work as a mentor to other officers in his district,” the president said. “Every two weeks, he’d send his wife flowers at work, like clockwork, to brighten her day and her office. He was killed responding to a domestic violence call.”