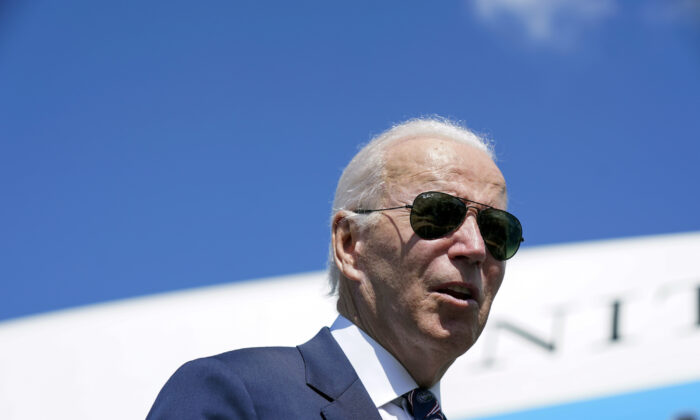 President Joe Biden has touted the progress that is being made to bring down soaring inflation across the United States, despite the cost of living continuing to burden American households.

Biden made the comments during a speech at Boston’s Logan Airport in Massachusetts on the afternoon of Sept. 12, where he said his administration was optimistic that the country was “on the right track” when it comes to tackling inflation.

“We’re seeing hopeful signs of progress on inflation,” Biden said. “The price of gas, when we said not—what I was doing wouldn’t make any difference—well, guess what? It’s down $1.30 since the start of the summer and continues to go down.”

“Inflation eased in July,” he continued. “I said last spring that our top economic priority was to bring down inflation without giving up on all the gains American workers made in the last year. But there’s more to do—a lot more to do. The American people should have confidence that we are on the right track, that we’re seeing real progress.”

Meanwhile, the food at home index rose 13.1 percent over the last 12 months. Gasoline prices fell 7.7 percent in July but are still up 44 percent year over year.

Official data for August will be published on Tuesday and will show whether inflation rose again last month or remained steady. Experts predict data to show that inflation declined by just over 1 percent.

Meanwhile, a Gallup poll published earlier this month found that the majority of Americans are struggling with financial hardship owing to rising inflation.

The poll found that 56 percent of Americans say price increases are causing financial hardship for their household, up from 49 percent in January and 45 percent in November. Among those surveyed, 12 percent described the hardship as severe and 44 percent as moderate.

The survey found that financial hardship was hitting middle-income Americans as well as lower-income households, with both having to cut back on spending or opting instead to only purchase essential items, and cut down on travel. Those households also stated that they are driving less or trying to curb gas use amid soaring costs at the pump.

Biden on Monday touted the progress his administration has made in tackling inflation despite the challenges stemming from COVID-19 and Russia’s ongoing invasion of Ukraine.

“We started with the American Rescue Plan. That’s taken us from economic crisis to economic resurgence. Jobs and incomes are up. People are back to work,” Biden said. “And that progress has continued in recent months, even as economics around the world have faced challenges, from Delta to Omicron to the ongoing war in Ukraine.”