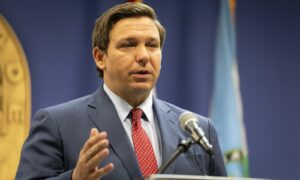 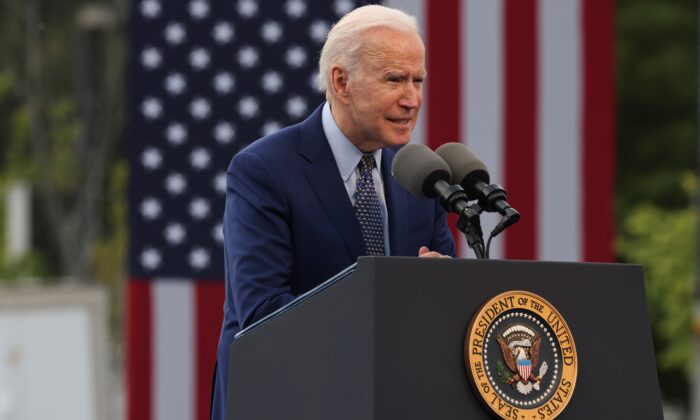 President Joe Biden speaks during the Democratic National Committee's "Back on Track" drive-in car rally to celebrate the president's 100th day in office at the Infinite Energy Center in Duluth, Ga., on April 29, 2021. (Evelyn Hockstein/Reuters)
US News

WASHINGTON—President Joe Biden on Friday imposed new travel restrictions on India in light of the COVID-19 epidemic, barring most non-U.S. citizens from entering the United States.

The new restrictions, which take effect on Tuesday, May 4 at 12:01 am ET, are on the advice of the U.S. Centers for Disease Control and Prevention (CDC) and were imposed because “the magnitude and scope of the COVID-19 pandemic” in India was “surging,” the White House said.

Biden on Friday signed a proclamation implementing the restrictions, which were first reported by Reuters.

The proclamation said India “accounts for over one-third of new global cases” and added that “proactive measures are required to protect the nation’s public health from travelers entering the United States” from India.

In January, Biden issued a similar ban on most non-U.S. citizens entering the country who have recently been in South Africa. He also reimposed an entry ban on nearly all non-U.S. travelers who have been in Brazil, the United Kingdom, Ireland and 26 countries in Europe that allow travel across open borders. China and Iran are also both covered by the policy.

The policy means most non-U.S. citizens who have been in one of the stated countries within the last 14 days are not eligible to travel to the United States. Permanent U.S. residents and family members and some other non-U.S. citizens, such as students, are exempted.

The decision to impose the latest travel restrictions came about quickly and was only reached in the last 24 hours, sources said.

The Indian Embassy in Washington did not immediately comment.

Total deaths have surpassed 200,000 and cases are nearing 19 million—nearly 8 million since February alone.

Medical experts say real numbers may be five to 10 times higher than the official tally.

Other countries have imposed similar travel restrictions on India, including the United Kingdom, Germany, Italy and Singapore, while Canada, Hong Kong and New Zealand have suspended all commercial travel with India.

On Wednesday, the White House said the United States was sending supplies worth more than $100 million to India to help it fight the COVID-19 surge.

The supplies include oxygen cylinders, N95 masks and rapid diagnostic tests. The United States also has redirected its own order of AstraZeneca manufacturing supplies to India, which will allow it to make over 20 million doses of COVID-19 vaccine, according to the White House.

Nearly all travelers to the United States by air must show proof of a negative coronavirus test or recovery from COVID-19.

In recent weeks, the White House and U.S. agencies have begun holding conversations about how to eventually unwind the policy as vaccination campaigns are rolling out and cases are declining in some countries.

U.S. international air travel remains down 60 percent from pre-COVID-19 levels, while U.S. domestic air travel is down 40 percent, according to industry trade group Airlines for America.

U.S. airlines and travel groups have urged the White House to set benchmarks for the eventual loosening of restrictions.