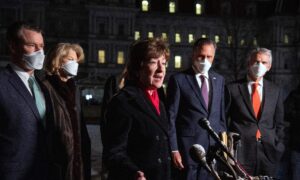 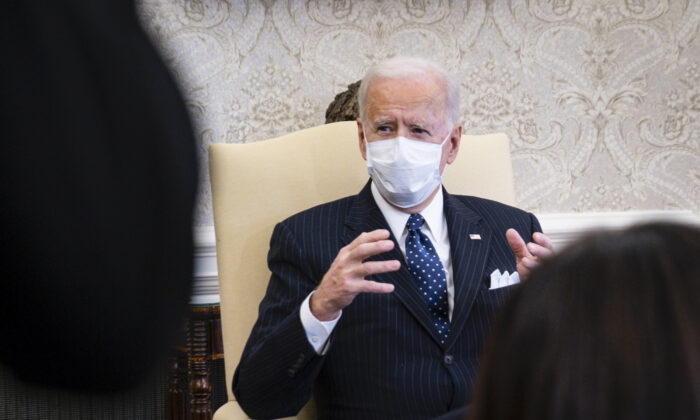 President Joe Biden in the Oval Office at the White House in Washington on Feb. 9, 2021. (Pete Marovich for The New York Times)
Executive Branch

President Joe Biden backs a $75,000 limit on income for people who would get $1,400 stimulus checks under a House proposal for the CCP virus relief bill.

That amount is $25,000 higher than than the income limit sought by Sen. Joe Manchin (D-W.V.)  whose crucial vote the Democrats would likely need should they choose to push the legislation through using the budget-reconciliation procedure which requires a simple majority to pass.

Asked whose proposal Biden backs, White House press secretary Jen Psaki said “he supports where the status of the negotiations are at this point, so, yes, the $75,000,”

Biden’s plan is reflected in the proposal released on Monday by Rep. Richard Neal (D-Mass.) The maximum income for couples under that proposal is $150,000, compared to the $100,000 backed by Manchin.

The Senate is split 50-50, with two independents voting with Democrats and Vice President Kamala Harris on deck to break ties.

During the briefing, Psaki noted that while Biden has been open to a discussion about thresholds, he’s been firm about the $1,400 amount for the direct payments.

“The president has conveyed from the beginning of this discussion that he’s open to having a discussion about the thresholds. He has been firm in his resolve that Americans should be made whole on the $2,000 checks, which of course would mean—be maintaining his firmness on the $1,400 checks,” Psaki said, referring to the $2,000 amount reached if the proposed payments were to be combined with the $600 payments from the most recent relief bill.

“But there’s been a discussion about the thresholds and what those should look like, and he doesn’t feel that families making over $250,000 a year should be the target of this relief,” Psaki said.

Neal’s CCP (Chinese Communist Party) virus relief proposal includes the first expansion of Obamacare in over a decade, a mandate for a $15 federal minimum wage, and a $3,600 per-child tax credit which turns into a direct payment for families that don’t owe taxes.

The child tax credit, if enacted in perpetuity, would be “the second-largest expansion of means-tested welfare entitlements in U.S. history,” according to the Heritage Foundation.

“In constant dollars, its annual cost would dwarf the initial costs of the Medicaid, Food Stamp, and Aid to Families with Dependent Children programs. Only Obamacare would be more expensive,” the foundation said in a newsletter released on Tuesday.

The Congressional Budget Office has estimated that the $15 minimum wage proposal would result in the loss of at least 1.3 million jobs.