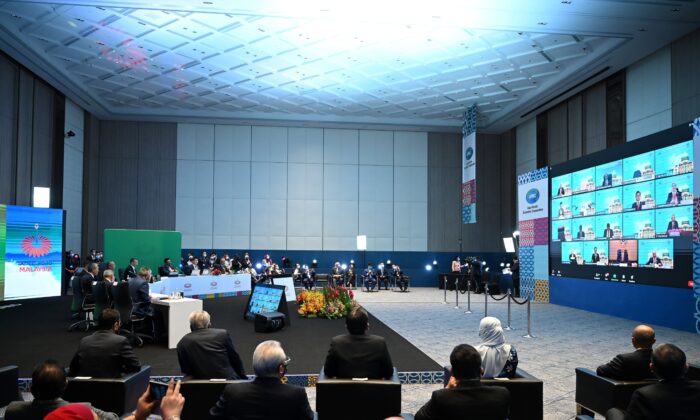 President Joe Biden just appointed a major donor, Dominic Ng, as a representative from the United States to the Asia-Pacific Economic Cooperation (APEC) Business Advisory Council. The only apparent problems with this appointment are what appears to be a compromise of Biden and Ng’s ethics.

Ng donated over $135,000 to Democratic causes in 2020, according to investigative journalist Chuck Ross in The Washington Free Beacon on April 29. These donations might have influenced Biden to appoint Ng despite the availability of better candidates.

Ng self-plagiarizes and broadcasts Chinese Communist Party (CCP) talking points, which are hardly the attributes one should choose in a representative from the United States to a major Asia-Pacific international organization.

The CCP, it will be remembered, is committing an ongoing and unrepentant genocide in China, and has threatened a military invasion against our democratic friends in Taiwan, not to mention quieter but similar alleged threats of military violence against the Philippines and Australia. After the Ukraine invasion, all such threats should be taken seriously.

Mr. Ng does not publicly advocate such atrocities, as far as I know, but he does support economic policies that enable the CCP to commit them.

Affinity for the CCP

Ng’s East West Bank is headquartered in Pasadena, California, but has a focus on China, including heavy lending in Asia. Ross documents what he calls Ng’s consistent defense of “some of Beijing’s most controversial policies.”

“President Joe Biden’s pick to represent the United States on a council that promotes free trade in Asia has a long history of cozying up to the Chinese Communist Party,” according to Ross.

“Ng has endorsed China’s infrastructure program, the Belt and Road Initiative, and criticized the United States for refusing to join the program,” Ross adds. “He has sided with Beijing on other hot-button issues such as the origins of the coronavirus. Ng also criticized two Biden-backed bills to make the United States more competitive with China.”

Ng argues that U.S. tariffs against China should exclude imports “that have no strategic relevance whatsoever,” such as consumer goods.

Ng does not acknowledge that the CCP enriches itself and its military with the taxes the regime levies on the production, export, and import of approximately $600 billion annually in U.S.-China trade, including those consumer goods. The massive increase in China’s global trade since the 1990s has given it the annually increasing revenues it uses to build a military that now threatens the United States and its allies in Asia.

Therefore, all revenue sources of Beijing are strategic, including all of China’s exports of consumer goods to the United States.

“It would be one thing if the costs borne by American businesses and consumers [from trade tensions or tariffs with China] led to a better deal for the United States,” wrote Ng in an article dated Aug. 30 on his bank’s website. “But the gains from the trade war are murky at best.”

Those sentences, and the paragraph from which they came in a first article, are reproduced verbatim in a second article on March 1, 2022, which also appeared on the bank’s website.

The first article is titled “It’s Time to Talk About Easing Trump’s China Tariffs,” and the second article, in which Ng plagiarizes himself, is titled “To Innovate, Put Our Strengths and Values First.”

Both papers are controlled by owners in China (which now includes Hong Kong).

Susanne Hall, a teaching professor at Caltech, has a nuanced understanding of self-plagiarism, which she prefers to call “text recycling.” She notes that in some cases, such as technical definitions in academic papers, recycling is justifiable.

But other kinds of recycling, in which Ng’s case falls, I would argue, are unethical.

Ng did not immediately respond to a request for comment.

Ross writes that “Ng, who has led the East West Bank since 1992, contributed $100,000 to the Biden Victory Fund and $35,500 to the Democratic National Committee in October 2020, according to campaign finance disclosures.”

Thus, despite Ng’s apparent ethics lapses, he seems to have gotten a good deal. For comparison, Biden appointed Joe Kiani to the Council of Advisors on Science and Technology. Kiani gave “$1 million to Biden’s family charity and bundled $1 million in donations for Biden’s campaign,” according to Ross.

During a time when the threat from China and Russia is only increasing, those with ethics issues, political affinities with the CCP or Vladimir Putin, or strong business ties to the world’s worst regimes are unfit for political influence. Ng has all three problems.

What I would call “legalized corruption” affects American presidents of both parties and, of course, has nothing to do with the race or ethnicity of the donor. Stephen Schwarzman is another financier and big political donor with major ties to China, who should not have had the opportunity to influence former President Donald Trump to the extent that he did.

Both parties are expected to reward all kinds of their biggest donors with access to the president and plum positions as ambassadors and on advisory boards.

This corruption of the foreign policymaking process during a period of increased global challenges perverts what should be a rational American foreign policy, and thus endangers the strength and stability of the U.S. government.

All those with business or ideological ties to the world’s worst dictators in China and Russia should not be entrusted with outsized political access in Washington or abroad. With it, they endanger America’s and democracy’s standing in the world. Say no to China-linked political favoritism, no matter how much money donors dole out in apparent attempts to buy influence.