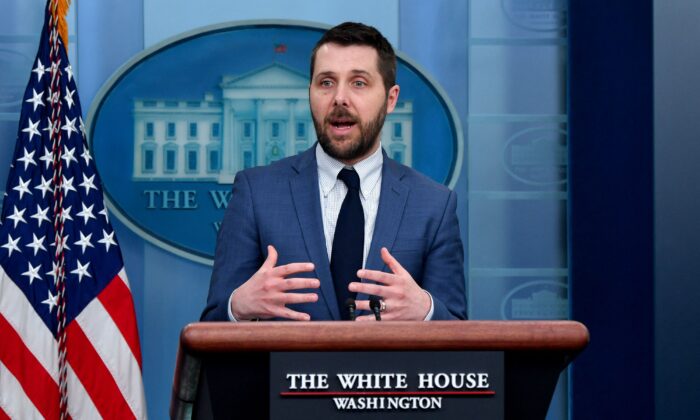 Director of the National Economic Council Brian Deese speaks during a briefing in the James S. Brady Press Briefing Room of the White House in Washington, on March 31, 2022. (Nicholas Kamm/AFP via Getty Images)
Inflation

A senior Biden administration official on Thursday defended the commander-in-chief’s remarks that U.S. drivers should expect to pay higher prices at the pump until the Russia-Ukraine war is over, with National Economic Council Director Brian Deese saying that inflation-weary Americans must “stand firm” and defend the “liberal world order.”

Deese made the remarks in an appearance on CNN on June 30, during which he was asked to comment on President Joe Biden’s response to a journalist who asked the president how long American drivers can reasonably be expected to “pay a premium for this war.”

“As long as it takes,” Biden replied to the reporter during a press conference in Madrid, Spain, with the president adding that the aim is “so that Russia cannot in fact defeat Ukraine and move beyond Ukraine.”

“This is a critical, critical position for the world,” Biden added, while once again blaming the elevated gas prices on the Russia–Ukraine conflict.

‘We Have to Stand Firm’

During his appearance on CNN, Deese was asked to deliver a message “to the families that say ‘we can’t afford to pay $4.85 a gallon for months, if not years, this is not sustainable.'”

He replied by saying that Biden’s remarks were a “clear articulation of the stakes” and that “this is about the future of the liberal world order, and we have to stand firm.”

Deese added that the administration “is going to do everything in its power to blunt those price increases and bring those prices down.”

According to scholarship on the subject, the liberal world order is generally understood as the U.S.-led post-Cold War rules-based system of laws and norms that underpins the world’s democracies.

Some prominent academics, like University of Chicago professor John Mearsheimer, have argued that the liberal world order is crumbling amid a resurgence of nationalism, which emphasizes self-determination and resists ceding authority to international institutions.

“The post–Cold War liberal international order was doomed to collapse, because the key policies on which it rested are deeply flawed,” Mearsheimer argued in a 2019 essay in the International Security journal.

“Spreading liberal democracy around the globe, which is of paramount importance for building such an order, not only is extremely difficult, but often poisons relations with other countries and sometimes leads to disastrous wars,” wrote Mearsheimer, who has blamed the West for the war in Ukraine by seeking to impose the conditions of a liberal international order on Russia.

One of the fallouts from the Russia-Ukraine conflict has been a disruption of energy markets, making it a likely factor helping push gasoline prices higher, also in the United States.

Data from AAA show that the average U.S. price for a gallon of regular gasoline stands at around $4.842 as of Friday morning. That’s about an 8-cent decline from last Friday, although it represents a 17-cent increase from one month ago.

While Biden has sought to pin the blame on soaring gas prices on the war in Ukraine and oil company greed, Republicans have said that the president’s green energy agenda and policies targeting the American oil and gas sectors are the reason why prices at the pump have hit record levels.