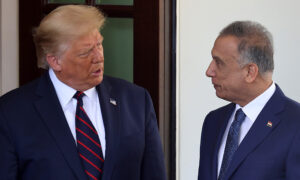 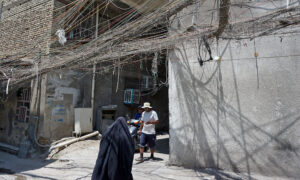 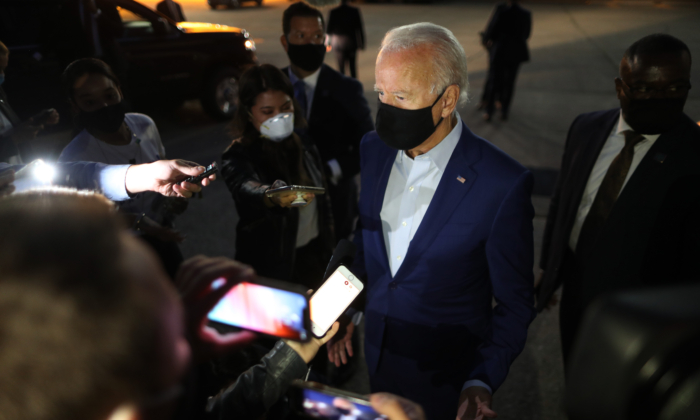 Biden Agrees With Trump’s Decision to Pull Troops From Iraq

Asked if he agreed with the president’s move, Biden said: “Yes, I do. As long as he has a plan to figure out how he’s going to deal with ISIS.”

Biden voted to authorize the war in Iraq in 2002. He then admitted in his book “Promises to Keep,” released during his 2007 presidential bid, that it had been a mistake.

Earlier this year at the tail end of a trip to Michigan—a key battleground state that he and Trump are vying over ahead of the presidential election in November—the former vice president again said that his vote had been a mistake.

The United States on Sept. 9 announced plans to withdraw 2,200 troops from Iraq before the end of September. The drawdown will take the number of American forces to 3,000.

“We are continuing to expand on our partner capacity programs that enable Iraqi forces and allow us to reduce our footprint in Iraq,” Marine Gen. Frank McKenzie, head of U.S. Central Command, said during a visit to the country.

The announcement of the withdrawal came after the president recently renewed his criticism of U.S. involvement in what he calls “endless wars.” The war in Iraq has cost the United States taxpayers an estimated $2 trillion, with a large portion of the sum benefiting private defense contractors.

“We will hunt down terrorists who threaten our citizens, and we will lead America out of endless, ridiculous foreign wars,” Trump told a rally in North Carolina on Sept. 8, referring to his administration’s foreign policy.

The United States and Iraq in June affirmed their commitment to the reduction of U.S. troops in the country in the coming months, with no plans by Washington to maintain permanent bases or a permanent military presence there.

In 2016, Trump campaigned on ending America’s “endless wars.” U.S. troops remain in countries such as Afghanistan, Iraq, and Syria, albeit in smaller numbers.

The United States and Iraq began discussing the partial withdrawal of U.S. troops in December 2019. An escalation of tensions with Iran added further points for consideration in January, when the Iraqi Council of Representatives voted for a resolution to expel all foreign troops. Trump initially refused to withdraw troops from Iraq.

By March, the U.S.-led coalition cited developments in the mission to eradicate the ISIS terrorist group and began to transfer bases back to Iraq. Four bases were transferred by early April.

In June, the United States and Iraq began virtual negotiations about the withdrawal, which were expected to continue for months.

Trump told reporters during an Aug. 20 meeting with Iraq’s prime minister that, at some point, the United States will be completely withdrawn from Iraq.

“We have been taking our troops out of Iraq fairly rapidly, and we look forward to the day when we don’t have to be there. And hopefully Iraq can live their own lives and they can defend themselves, which they’ve been doing long before we got involved,” he said.

Then-Prime Minister Adil Abdul-Mahdi asked in January for the United States to prepare to withdraw troops but later said he’d leave the decision to his successor.

The United States drew down troops from Afghanistan earlier this year to an agreed upon target of 8,600.