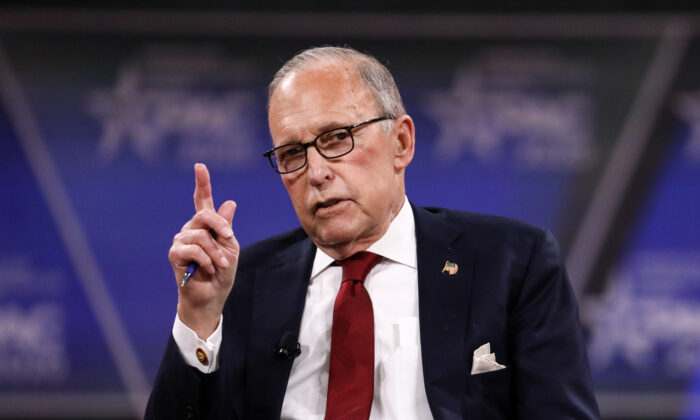 Russia has been hit with a string of sanctions from the West in recent days following its invasion of Ukraine, with officials targeting the country’s finances, sovereign debt, and those in Putin’s inner circle.

Larry Kudlow: How the US Could Gut Russia’s War Chest | CPAC 2022

Meanwhile, leaders from Europe, the UK, and the United States issued a joint statement on Feb. 26, unveiling further sanctions against the Kremlin which include removing “selected” Russian banks from the international payment service SWIFT.

Yet the United States has so far stopped short of directly sanctioning Russia’s energy sector for fear that it could further drive up global energy prices, which have already skyrocketed in recent months, and result in an energy crisis.

Opponents of such sanctions are concerned that the United States, as well as much of the European Union, enjoys close energy and trade ties with Russia, which is one of the world’s largest producers of oil and natural gas.

The most recent data from the U.S. Energy Information Administration show that the United States increased its oil imports from Russia by about 28 percent in the first 11 months of 2021, while the country doubled the amount of crude oil it imported from Moscow last year.

Yet Russia only accounted for around 3 percent of the overall U.S. crude oil imports in 2021.

Kudlow told EpochTV’s “American Thought Leaders” that President Joe Biden wouldn’t be so concerned with the consequences of sanctioning Russia’s energy sector if his policies regarding energy in the United States weren’t so “terrible.”

“They’re worried about, you know, Russia not being able to sell oil and gas. Alright, that’s the bottom line. So that would be a problem in the short run. Now, that problem is fixable if Joe Biden had a good energy policy, but he has a terrible energy policy,” Kudlow said. “He’s running a jihad against fossil fuels, as you probably know, and that’s the reason we’re in the fix we’re in right now.”

Kudlow’s comments echo those of Sen. Josh Hawley (R-Mo.) who on Feb. 28 vowed to introduce legislation that will reopen energy production in the United States “full throttle” and reverse Biden’s policy of “American energy surrender.”

Hawley introduced the bill after oil prices surged above the $100 per barrel mark on Feb. 23, shortly after Putin announced a “military operation” was set to get underway in Ukraine.

Kudlow went on to explain that Putin continues to profit from skyrocketing oil prices, providing the Kremlin with the financial means to invade countries such as Ukraine.

“When oil prices are low, you don’t hear from Putin. When oil prices are high, that’s how they make their money. That’s all they have. John McCain used to say, Russia is like an old gas station masquerading as a country,” Kudlow continued.

“So go back in time, in 2008. Oil gets $150 a barrel. What happened? Putin took Georgia, then oil prices fell back. And then the fracking revolution started. Under Obama … And we didn’t hear from Putin for years. But then, in 2014, for a variety of reasons, oil prices jumped back to 100 bucks a barrel. From like, 25 to 100. Well, Putin takes Crimea, he has the money from his oil profits to do that, you know, then Trump comes in, and we have energy independence and we are full throttle with the drillers and the frackers, you don’t hear from Putin,” Kudlow said.

“In the last year, as Biden comes in and he runs this jihad against fossil fuels, he takes out the Keystone [oil pipeline], he takes out Alaska drilling, he takes out a number of pipelines. Right now the Energy Department is sitting on six applications for LNG exports, and they won’t pass it, the Interior Department has stopped all leasing of federal lands, they just stopped it. So we’re at $100 a barrel and rising so Putin has got the money to go into Ukraine,” Kudlow said.

Larry Kudlow: How the US Could Gut Russia’s War Chest | CPAC 2022

The Republican added that the United States has effectively financed Putin’s aggression with its “stupid energy policies,” which he said have raised the price of oil unnecessarily.

“So the moral of the story is, we have spare capacity in oil and natural gas and LNG, use it to stop this crazy radical left wing green assault on fossil fuel and carbon … there is no world without fossil fuels. But Biden bought into this far-left agenda. It was a gift to Putin.”