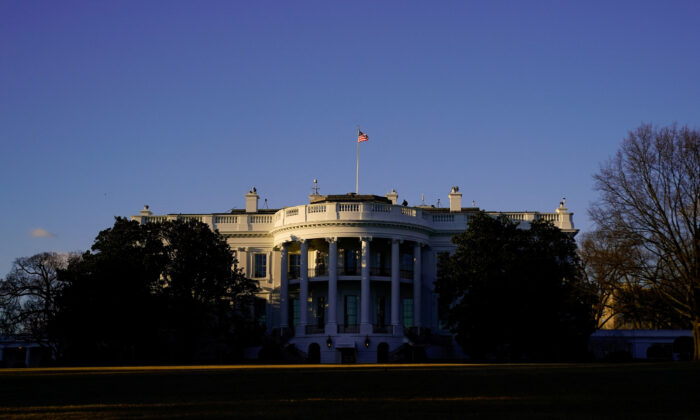 The White House is seen at sunset in Washington on March 6, 2021. (Erin Scott/Reuters)
Executive Branch

WASHINGTON/LOS ANGELES—President Joe Biden’s administration on Tuesday made contingency plans aiming to ensure deliveries of critical goods in the event of a shutdown of the U.S. rail system while pressing railroads and unions to reach a deal to avoid a work stoppage affecting freight and passenger service.

The potential shutdown, which could come as early as Friday, could freeze almost 30 percent of U.S. cargo shipments, stoke inflation, impede supplies of food and fuel, cost the U.S. economy about $2 billion per day and cause transportation woes.

Railroads including Union Pacific, Berkshire Hathaway’s BNSF, CSX, and Norfolk Southern have until a minute after midnight on Friday to reach tentative deals with three hold-out unions representing about 60,000 workers.

If agreements are not reached, there could be union strikes or employer lockouts. But the railroads and unions also could agree to stay at the bargaining table or the Democratic-led Congress could intervene by extending talks or establishing settlement terms.

The Biden administration’s push comes as food, energy, automotive, and retail groups implore Congress to intervene, saying a rail shutdown could threaten everything from global grain supplies to shipments of goods related to Christmas holiday shopping.

Railroads on Monday stopped accepting shipments for hazardous materials such as chlorine and chemicals used in fertilizer so they are not stranded in unsafe locations if rail traffic stops.

The energy sector relies on railroads to move coal, crude oil, ethanol, and other products.

The stakes are high for Biden, who has vowed to rein in soaring consumer costs ahead of November elections that will determine whether his fellow Democrats maintain control of Congress.

Biden appointed an emergency board in July to create a framework for settlement terms.

That has not happened since the early 1990s, when Congress sent the parties into final and binding arbitration.

Unions in the current talks have been offered significant pay increases. Three of 12 unions, representing about half of the 115,000 workers affected by the negotiations, have yet to sign deals. They are grappling with railroads over working conditions that they have said worsened after the industry slashed its workforce by almost 30 percent during the past six years.

Rail customers have said a shutdown will send them scrambling for alternative transportation and storage for everything from ammonia and fuel to cars and chicken feed.

It takes about four trucks to handle cargo in a single rail car. The United States does not have the estimated 467,000 trucks or the necessary labor to support such a shift. Beyond that, some cargo is too heavy or large to travel over the road.

A rail work stoppage could strike as U.S. farmers harvest corn, wheat, and soybeans for export around the world, according to the National Grain and Feed Association.

“The economic damages across the food and agricultural supply chain would be swift and severe,” the group said.

Automakers worry that a disruption could empty dealer showrooms by stranding cars in the wrong places. Toyota said it would have to store vehicles and “many locations would run out of storage within two to four days of production.”