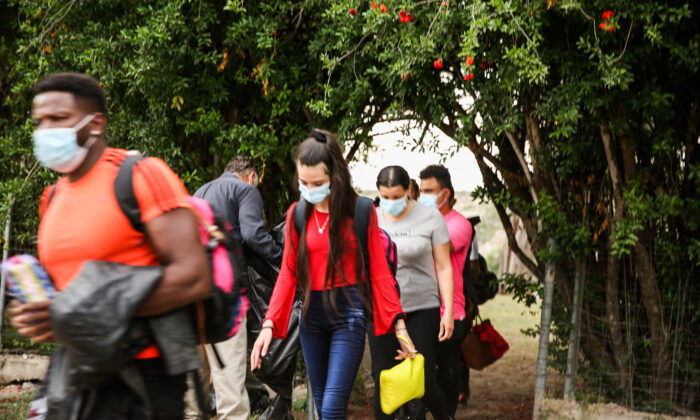 The U.S. government on July 11 extended deportation protections for hundreds of thousands of Venezuelan nationals who are in the United States.

Homeland Security Alejandro Mayorkas granted an 18-month extension of Temporary Protected Status (TPS) for Venezuelans who were in the United States as of March 8, 2021.

“This action is one of many ways the Biden administration is providing humanitarian support to Venezuelans at home and abroad, together with our regional partners. We will continue to work with our international partners to address the challenges of regional migration while ensuring our borders remain secure,” Mayorkas said.

TPS, established by Congress in 1990, enables the head of the Department of Homeland Security to offer protection to immigrants from certain countries if the secretary finds the immigrants’ home countries meet certain legal criteria, such as being embroiled in an armed conflict.

Mayorkas, in one of his first moves as DHS secretary, in March 2021 granted TPS to Venezuelans because he said their home country is “in turmoil” and “unable to protect its own citizens.”

Like many of the Biden administration’s immigration-related policies, the action differed from the course taken during the Trump administration, which had granted a lower-level protection to a smaller number of Venezuelan nationals.

Lawmakers from both parties had lobbied for an extension, including Sens. Chris Van Hollen (D-Md.) and Marco Rubio (R-Texas).

“We ask that you acknowledge the deteriorating conditions in Venezuela since the March 8, 2021 designation and take the necessary steps to extend and redesignate Venezuela for TPS,” Van Hollen and other senators wrote to Mayorkas earlier this month.

The extension takes the protection for the individuals through March 10, 2024.

Mayorkas said he consulted with Secretary of State Antony Blinken before granting the extension.

Approximately 343,000 Venezuelans are shielded by the TPS designation, though each must apply to get the protection. More than 142,067 others were arrested at the U.S.–Mexico border since April 1, 2021, according to government records.

Venezuelans not protected by TPS can claim asylum, although most asylum claims are rejected because they don’t meet the criteria laid out in federal law. Asylum-seekers, though, are often released until their claims are heard, and a number remain in the country even if their claims are ultimately rejected.