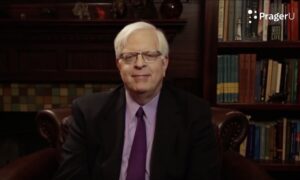 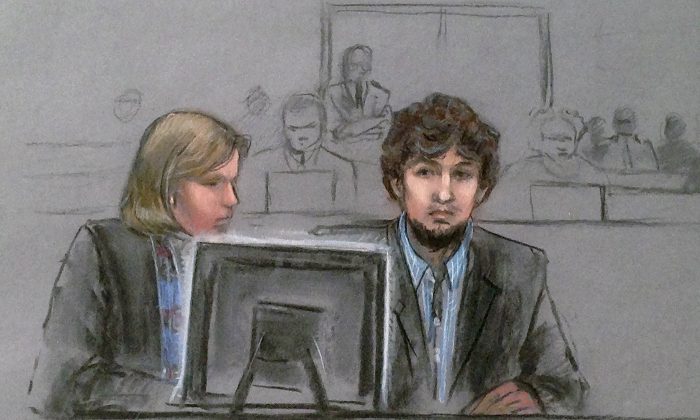 In this courtroom sketch, Dzhokhar Tsarnaev, right, and defense attorney Judy Clarke are depicted watching evidence displayed on a monitor during his federal death penalty trial in Boston on March 9, 2015. (Jane Flavell Collins via AP)
Judiciary

The Biden administration has asked the Supreme Court to reinstate the death sentence against the Boston Marathon bomber even though President Joe Biden promised on the campaign trail last year to abolish capital punishment.

The Supreme Court agreed March 22 to hear the government’s appeal. Oral arguments are expected in the court’s new term that begins in October.

Acting Solicitor General Elizabeth Prelogar asked the justices on June 14 to overturn a July 31, 2020, ruling by the U.S. Court of Appeals for the 1st Circuit that vacated the federal death sentence pronounced against Dzhokhar Tsarnaev, the lone surviving perpetrator of the 2013 attack that has been deemed one of the worst acts of terrorism on U.S. soil since Sept. 11, 2001. Three people were killed and 260 injured. The appeals court held that the trial court hadn’t properly assessed potential jury bias, and the Trump administration appealed.

“The jury carefully considered each of respondent’s crimes and determined that capital punishment was warranted for the horrors that he personally inflicted—setting down a shrapnel bomb in a crowd and detonating it, killing a child and a promising young student, and consigning several others to a lifetime of unimaginable suffering,” stated the government’s brief in U.S. v. Tsarnaev, court file 20-443.

“That determination by 12 conscientious jurors deserves respect and reinstatement by this Court.

“The court of appeals improperly vacated the capital sentences recommended by the jury in one of the most important terrorism prosecutions in our Nation’s history,” the brief stated. “This Court should reverse the decision below and put this case back on track toward a just conclusion.”

Citing various court documents, the brief stated that Tsarnaev is a “radical jihadist … bent on killing Americans.” He told a friend he wanted to “bring justice for [his] people” and attain the “highest level of Jannah [paradise],” which his friend interpreted as meaning that Tsarnaev wanted to wage jihad. He expressed the same wish to his followers on Twitter, whom he encouraged to view al-Qaeda lectures, and he publicly prayed for “victory over kufr [infidels].”

Working with his late brother, Tamerlan, Tsarnaev placed homemade pressure-cooker shrapnel bombs filled with BBs and nails near the crowded finish-line area of the Boston Marathon. The bombs caused devastating injuries that left the street with “a ravaged, combat-zone look.”

“Blood and body parts were everywhere,” littered among “BBs, nails, metal scraps, and glass fragments,” according to one court document. “The smell of smoke and burnt flesh filled the air” and “screams of panic and pain echoed throughout the site.”

During the 2020 presidential campaign, as the Trump administration resumed federal executions after a years-long pause, Biden said the death penalty should be abolished.

“Since 1973, over 160 individuals in this country have been sentenced to death and were later exonerated. Because we can’t ensure that we get these cases right every time, we must eliminate the death penalty,” Biden wrote on Twitter July 25, 2019.

“Over 160 individuals who’ve been sentenced to death in this country since 1973 have later been exonerated,” the website stated, while including a hyperlink to an information page created by the Death Penalty Information Center.

“Because we cannot ensure we get death penalty cases right every time, Biden will work to pass legislation to eliminate the death penalty at the federal level, and incentivize states to follow the federal government’s example. These individuals should instead serve life sentences without probation or parole.”

As recently as March, Biden was against capital punishment.

When the Supreme Court decided in the spring to hear the case, White House press secretary Jen Psaki reiterated Biden’s opposition to the death penalty.

“President Biden made clear, as he did on the campaign trail, that he has grave concerns about whether capital punishment, as currently implemented, is consistent with the values that are fundamental to our sense of justice and fairness. He’s also expressed his horror at the events of that day and … Tsarnaev’s actions,” Psaki said, CNN reported at the time.