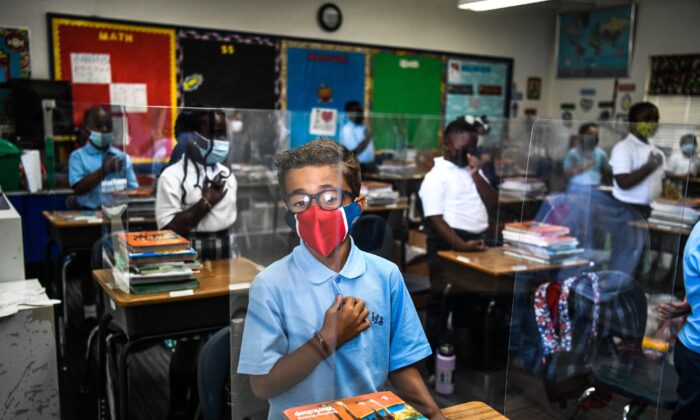 Students wear masks as they attend their first day in school after summer vacation at the St. Lawrence Catholic School north of Miami, on Aug. 18, 2021. (Chandan Khanna/AFP via Getty Images)
Florida

The U.S. Department of Education on Monday said it would take “enforcement actions” if Florida doesn’t remove financial sanctions on school districts that are acting in violation of state rules about mask mandates.

The warning comes weeks after the Florida State Board of Education unanimously voted to approve additional punishment for school districts that remain non-compliant with Florida’s mask policies, which give parents the final say on whether their children wear a mask at school. The state has already withheld school board members’ salaries in some districts that don’t allow students to opt-out of mask mandates through parental requests.

The new punishment, recommended by Florida Education Commissioner Richard Corcoran, specifically targets districts that take money from a federal grant designed to help school officials recover from penalties related to mask and other COVID-19 restrictions they put in place.

Now, the federal government warned that if Florida moves forward with the financial sanctions, the state would be in violation of the Elementary and Secondary Education Act of 1965.

“A State shall not take into consideration payments under this Act … in determining … the amount of State aid, with respect to free public education of children,” Ian Rosenblum, the deputy assistant secretary for policy and programs at the Education Department, wrote in a letter to Corcoran.

Florida’s cutbacks are affecting school districts in at least eight counties, including Alachua and Broward counties. Alachua County Public Schools became the first in the nation to receive funds from the federal grant known as Project SAFE (Supporting America’s Families and Educators) when it was awarded $147,719 to cover the penalties.

“If FLDOE moves forward with its planned reduction of state aid to Alachua and Broward, the department is prepared to initiate enforcement action to stop these impermissible state actions,” Rosenblum said. He didn’t specify what action the federal government is considering to take.

In a statement to The Epoch Times, the Florida Department of Education dismissed the letter as “harrassing” and “legally hollow.”

“Yes, we received another harassing and legally hollow letter from U.S. DOE, and again we will continue forward, lawfully,” said Jared Ochs, Director of Communications and External Affairs at Florida Department of Education.

“In terms of the data that supports mask use in kids and mandates for masking kids, it is very weak and that’s a fact,” Ladapo, who became the state surgeon general in September, said at an Oct. 20 event with Gov. Ron DeSantis. “There is a substantial gap between the quality of data out there supporting masking kids yielding any benefit for kids, whatsoever, factual, and what we’re hearing from some of our public health leadership in other states and nationally.”

“In Florida, we are going to stay close to the data and we’re going to let you know how we feel about the data,” he continued. “The data do not support any clinical benefit for children in schools with mask mandates. The highest quality data find no evidence of benefit.”