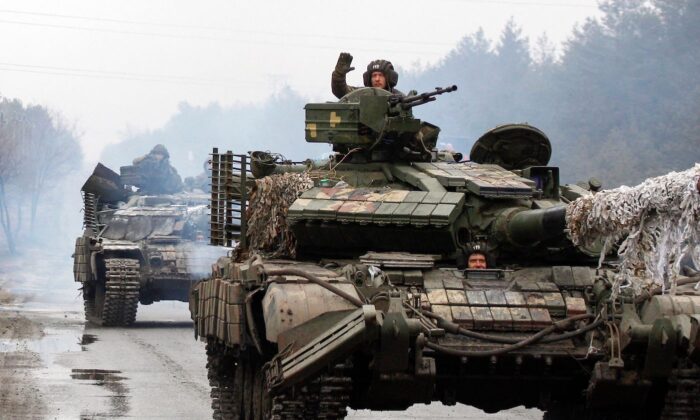 Ukrainian servicemen ride on tanks toward the front line with Russian forces in the Lugansk region of Ukraine, on Feb. 25, 2022. (Anatolii Stepanov/AFP via Getty Images)
US News

Nearly six months into the Russia–Ukraine war, the Biden administration on Monday announced a $1 billion security assistance package for Ukraine, coming on the same day it announced some $4.5 billion in aid to keep Ukraine’s government running.

Acting Pentagon press secretary Todd Breasseale announced that the latest $1 billion in aid “to meet Ukraine’s critical security and defense needs” is the Biden administration’s 18th drawdown of equipment from Pentagon inventories for Ukraine since August 2021.

It is also “the largest single drawdown of U.S. arms and equipment” using presidential drawdown authority, he noted, which means the military aid originates directly from U.S. stockpiles.

“President Biden has been clear that we will continue to support the Ukrainian people as they defend their country from Russian aggression, for as long as it takes,” Secretary of State Antony Blinken said in a statement. “As part of those efforts, pursuant to a delegation of authority from the President, today I am authorizing our largest single drawdown of U.S. arms and equipment utilizing this authority.”

Previously, the largest assistance package to Ukraine was announced in June, but it came from both presidential drawdown authority and authority granted to the Pentagon by the Ukraine Security Assistance Initiative (USAI), which was created in 2015 in response to Russia’s annexation of Crimea.

The arms package “provides a significant amount of additional ammunition, weapons, and equipment—the types of which the Ukrainian people are using so effectively to defend their country,” Breasseale said.

Capabilities in the package include additional ammunition for High Mobility Artillery Rocket Systems (HIMARS), which have a range of about 40 miles and allow Ukraine forces the power to strike faraway targets with more accuracy. The United States has provided 16 HIMARS to Ukraine so far.

Under Secretary of Defense for Policy Colin Kahl declined to specify how many rockets for the HIMARS have been included in the latest package.

“We’ve never given precise numbers of the rockets. We don’t want to tip off the Russians to every last detail. But what I can say is since we provided the HIMARS and the associated munitions, which are referred to as GMLRS, which stands for Guided Multiple Launch Rocket Systems—these are precision-guided missiles with about a 70-km range—we’ve provided multiple hundreds of these systems in the past few weeks. But I’m not going to go into the details of the specific number in this package,” he told reporters on Monday.

The weapons package also includes munitions for National Advanced Surface-to-Air Missile Systems (NASAMS), a Norwegian-developed anti-aircraft system that is the same system used to protect the airspace around the White House and Capitol in Washington. Kahl reminded reporters that there are “no NASAMS in this package.”

Lastly, the package includes 50 armored medical treatment vehicles, as well as medical supplies, which will include first aid kits, bandages, monitors, and other equipment.

Kahl told reporters that Russia is estimated to have 3,000–4,000 Russian armored vehicles in Ukraine amid the war. “A lot of that [loss] is because of the antiarmor systems like Javelin, like the AT-4s, which are in this package, but also, frankly, because of the creativity and ingenuity in the way the Ukrainians have used those systems,” he said.

“There’s a lot of fog in war, but I think it’s safe to suggest that the Russians have probably taken 70,000 or 80,000 casualties in less than six months,” Kahl also said. “That is a combination of killed in action and wounded in action, and that number might be a little lower, a little higher, but I think that’s kind of in the ballpark.”

Blinken said the United States and allies “will continue to consult closely with Ukraine and surge additional available systems and capabilities carefully calibrated to make a difference on the battlefield and strengthen Ukraine’s eventual position at the negotiating table.”