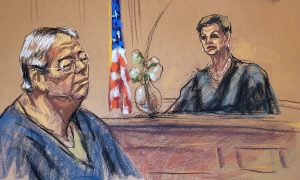 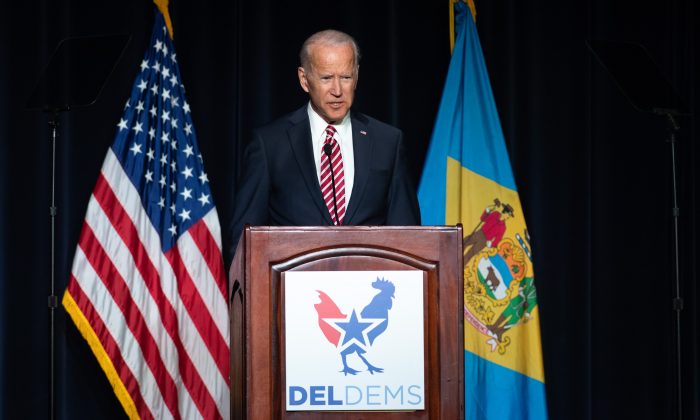 Biden Accuser Wants Him to ‘Acknowledge’ Wrongdoing Over Alleged Incident

Former U.S. Vice President Joe Biden on March 31 denied ever acting inappropriately after allegations came out that he made a woman uncomfortable when he kissed her at a campaign event back in 2014. But the accuser responded the same day, saying she wanted Biden to “change.”

“In my many years on the campaign trail and in public life, I have offered countless handshakes, hugs, expressions of affection, support and comfort,” Biden said in a statement. “And not once—never—did I believe I acted inappropriately. If it is suggested I did so, I will listen respectfully. But it was never my intention.”

Biden said he did not recall the 2014 incident.

Former Nevada state assemblywoman Lucy Flores responded to the new statement and said it was “certainly better” than the initial response from Biden’s spokesman, Bill Russo, on CNN’s “State of the Union.”

Russo’s initial statement said, in part, that “Neither then, nor in the years since, did (Biden) or the staff with him at the time have an inkling that Ms. Flores had been at any time uncomfortable, nor do they recall what she describes.”

Flores said she was glad Biden was willing to listen, but noted that she wants him to acknowledge more of what happened.

“If he is saying that he never believed that that was inappropriate, then frankly I think that’s a little bit of a disconnect,” she said. “I want him to change his behavior, and I want him to acknowledge that it was wrong,” she continued.

In an op-ed posted on The Cut on March 29, Flores detailed how she felt Biden get closer to her from behind at a campaign rally. Biden was there to offer his support in her bid for lieutenant governor in Nevada.

“He leaned further in and inhaled my hair. I was mortified. I thought to myself, “I didn’t wash my hair today and the vice-president of the United States is smelling it… He proceeded to plant a big slow kiss on the back of my head. My brain couldn’t process what was happening. I was embarrassed. I was shocked. I was confused.”

“I couldn’t move and I couldn’t say anything. I wanted nothing more than to get Biden away from me. My name was called and I was never happier to get on stage in front of an audience,” she wrote.

In describing the incident, she told CNN that the Biden’s actions were “completely inappropriate” and not normal in a “professional setting.” She said she believes his alleged behavior was “disqualifying” for Biden’s likely run for 2020. Biden has not yet made any formal announcement but has indicated that he has been considering whether to run or not.

Weeks ago, Biden had a slip of the tongue and almost announced running for president as he gave a speech to a dinner gathering of Democrats in Delaware.

Biden failed to develop a strong base of political support in his two previous presidential runs, dropping out of the race both times. If he were to be elected, he would be 78 years old when taking office, which would make him the oldest president-elect in U.S. history. He grew up in Scranton, Pennsylvania, and has spent more than four decades in Washington, mostly as a U.S. senator representing Delaware.

Flores also argued in her response that is not the first time that Biden has interacted with woman inappropriately.

Despite not having announced a presidential run, Biden is the clear frontrunner in all major polls tracking possible 2020 Democratic presidential contenders, including Morning Consult, Monmouth, Harvard-Harris, and Emerson. According to a RealClearPolitics average, Biden leads at 29 percent, as self-described socialist Sen. Bernie Sanders (I-Vt.) trails far behind at 22 percent.