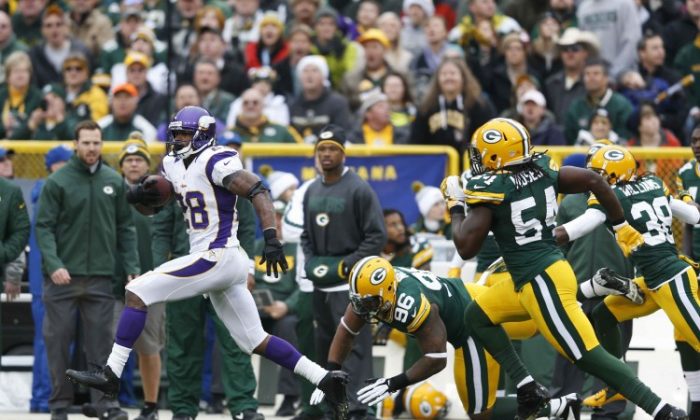 Indianapolis quarterback Andrew Luck gets set to throw a pass against the Kansas City Chiefs on Dec. 23. The No. 1 draft pick gets his first taste of NFL playoff action on Sunday in Baltimore (Jamie Squire/Getty Images)
NFL

NFL wild card weekend is upon us after a most unusual NFL regular season concluded last Sunday. Prior to Sunday’s games, the six playoff teams in the AFC were set, with only jockeying for positions remaining. The NFC, on the other hand, was where the serious thrills occurred.

We can thank the NFL for setting up 10 divisional games in the final week of the season—a new tradition it instituted in 2010. It culminated with the NFC title being up for grabs between Washington and Dallas in prime time on Sunday Night Football.

In early NFC action, Chicago held off a late surge by Detroit to keep their hopes alive for wild card spot. In doing so, they knocked out the defending Super Bowl champion New York Giants, who routed Philadelphia.

But later in the day, Minnesota edged Green Bay in the weekend’s most exciting game to knock out Chicago and capture the No. 6 seed in the NFC. Their reward is a rematch in Green Bay on Saturday night.

There’s nothing better than a game being played between two division rivals with the division title and privilege of hosting a wild card game at stake. Washington beat Dallas to capture their first NFC East crown since 1999.

Cincinnati (10–6) at Houston (12–4) is a matchup of two teams finishing the season in contrasting ways. The Bengals have won three in a row, while the Texans have lost two in a row.

The Texans started the season 11–1, but were crushed in New England on Monday night Dec. 10. They still could have locked up the top seed in the AFC, but losing two out of their next three games meant they didn’t even earn a first-round bye.

Cincinnati has been fighting for their playoff lives for a few weeks now, and hot teams entering the playoffs have done quite well in recent years. The last two Super Bowl winners came from wild card weekend and had built up some momentum as the regular season came to a close.

This is a matchup that could go either way and what should give the Bengals confidence is that they’ve won their last four road games, while the Texans were inexplicably hammered by visiting Minnesota in their final home game of the season.

This matchup is similar to the Bengals at Texans matchup in that the home team, Baltimore, struggled (losing four of their last five games) to end the season while visiting Indianapolis won five of their last six.

Luck has proven to be everything the Colts were expecting after they let Peyton Manning go, turning a 2–14 team into a dangerous playoff opponent. In fact, Luck is the only rookie QB to win 11 games and pass for over 4,000 yards.

The Ravens’ slide, not surprisingly, coincided with Ray Lewis’s injury absence. The inspirational leader of a fearsome defense, Lewis could return on Sunday, but how effective he can be is an open question. He announced on Wednesday that he will retire at the conclusion of the season.

It will be hard for the Vikings–Packers matchup to top the Week 17 one.

One thing you can bank on is the Packers seeing a lot of Adrian Peterson running the ball. A strong MVP candidate, Peterson averaged 205 rushing yards against Green Bay in two games this season—74 more yards per game than his season average.

Having a healthy Peterson and the league’s second-best running game allowed the Vikings to turn a 3–13 record last year into a 10–6 record this year. And again, keeping with the theme of entering the playoffs with momentum, Minnesota is on a four-game winnings streak that includes wins over Houston, Green Bay, and Chicago.

On the other side of the ball, Aaron Rodgers once again led the NFL in passer rating and has plenty of experience in big games. He should be able to have success against the Vikings defense, but what his defense has to do is to contain Peterson and make Vikings quarterback Christian Ponder win the game with his arm.

Lambeau Field is also a big advantage for the Packers who lost only one game there this season—and that was in Week 1.

Maybe the most intriguing matchup of wild card weekend is Seattle (11–5) at Washington (10–6) as two outstanding rookie QBs square off. Seattle’s Russell Wilson and Washington’s Robert Griffin III both had passer ratings of over 100.0—the only rookie quarterbacks to do so in NFL history.

In this matchup, both teams are red hot, run the ball extremely well, create takeaways, but Seattle’s defence is very stiff, unlike Washington’s.

Seattle’s defence allowed the fewest points in the league and excels against the pass, which is noteworthy as teams are often forced into passing situations against them since they’re trailing more often than not.

Griffin’s knee may not be 100 percent yet, but Kirk Cousins is a capable backup should the No. 2 draft pick get injured.

Seattle’s road record was only 3–5, the worst of any playoff team along with Minnesota, but Washington’s home record was only 5–3, but they won seven straight to end the season after starting 3–6. All this to say, this matchup can go either way is perhaps the most highly anticipated wild card matchup of the weekend.

The bottom line for the No. 1 and 2 seeds waiting for the wild card victors is that they’d better not be rusty as they’ll likely be facing a team brimming with confidence and strong momentum at their backs.