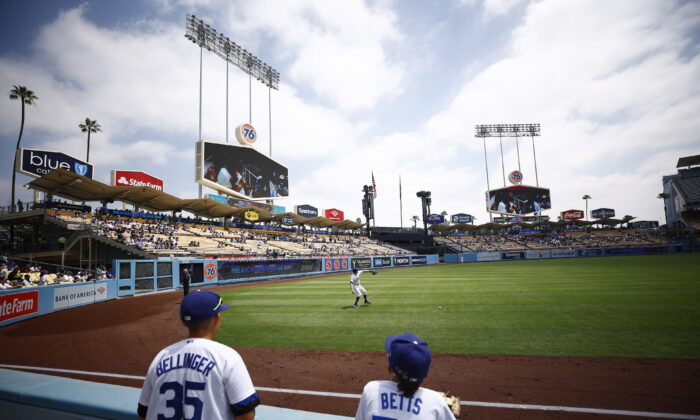 Children watch Los Angeles Dodgers warm-up before game one of a doubleheader against the Arizona Diamondbacks at Dodger Stadium, in Los Angeles, on May 17, 2022. (Ronald Martinez/Getty Images)
Baseball

The Los Angeles Dodgers swept the Arizona Diamondbacks in Tuesday’s doubleheader with a 7–6 rally in the afternoon win, and a 12–3 domination in the nightcap—improving their record to 24–12, and maintain a one game lead in the National League West over San Diego.

Mookie Betts’ form is returning after recovering from a nagging hip injury through 2021, raising his batting average from .171 in the first 10 games of the season to .263. Betts now leads the league with 32 runs scored this season.

“I’m having a lot of fun playing,” said Betts said. “Just trying to look at things from a different lens and trying to enjoy each and every day. It seems to be kind of giving me relief and taking some pressure off myself. I’m just enjoying being here.”

In the opener, Betts hit 3-for-4 with a homer and a double after the Dodgers were down 3–0 in the third inning.

Will Smith started the rally with a 410 feet home run in the bottom of the fourth inning off of Diamondbacks starter Tyler Gilbert (0–2).

Betts, Trea Turner, and Justin Turner would homer in the bottom of the sixth inning to take a 6–3 lead—the four home runs is their season best.

“It’s unbelievable,” said Dodgers shortstop Trea Turner on Betts’ recent stretch. “It’s kind of crazy the numbers he puts up. Been a while now watching him be healthy and really get going these last 20 games or so. He’s been really special.”

Arizona’s Alek Thomas hit a home run in the seventh inning off of Dodger reliever Mitch White, and Ketel Marte’s single off of Alex Vesia scoring Jake Hager to get within one, 6–5.

The Dodgers added a much needed insurance run in the bottom of the seventh as Betts scored after hitting a double with Freeman’s single to make it 7–5.

“It’s why he got paid a lot of money, why he’s won the awards and why he’s here leading us,” said Trea Turner. “Because of games like today.”

Arizona attempted a comeback in the ninth inning as Marte’s single scored Geraldo Perdomo to end the game at 7–6.

“It’s special to be able to be here on this team, to help the club as much as I can,” said Pepiot. “To watch the superstars on this team do what they did today, it’s a lot of fun.”

White was credited with his first win for the Dodgers in relief, and Craig Kimbrel notched his seventh save.

“We’re obviously a resilient team, and we’re going to play 27 outs,” added Betts. “We’re going to make people earn it. I think we’re a lot better when we’re playing downhill, but right now, the cards we’re being dealt is playing from behind, so we have to play from behind.”

Dodgers’ Tyler Anderson earned the win in the second game to improve to 4–0 over Arizona’s Merrill Kelly (3–2).

The Dodgers rallied in the first after an early deficit of 2–0. Betts began the bottom of the first with a walk, followed by Freeman’s double sending Betts to third.

T. Turner singled to center scoring both Betts and Freeman to tie the game at two, but Turner was thrown out attempting to reach second base.

The Dodgers overwhelmed Kelly in the second inning with six runs, on three hits. Max Muncy and Cody Bellinger began with a walk.

Gavin Lux then followed an out with a double to left field scoring Muncy and Bellinger.

Freeman was intentionally walked, and T. Turner singled to center scoring Lux. Edwin Rios then homered to left center, 390 feet, to score Freeman and Turner for a 8–2 advantage.

Betts was walked again after Austin Barnes and Lux both singled in the bottom of the sixth by Edwin Uceta.

Freeman then brought Barnes and Lux in with a ground rule double to left, followed by another run as T. Turner reached first on a throwing error by shortstop Perdomo, sending Betts home for a 11–2 lead.

The Dodgers added their final run in the bottom of the eighth inning after Betts reached first on a fielding error by third baseman Rojas. Freeman added his third RBI with a double, scoring Betts for their eventual 12–3 victory.

“We saw it in ’20. This guy, (Betts) was alive and energetic and jovial. Last year, there was only spurts of it,” said Dodgers manager Dave Roberts. “When you’re not healthy as an athlete and you’re trying to find a way to stay on the field, it takes the fun out of it. So when you’re healthy like Mookie is right now, you can get back to having fun.”