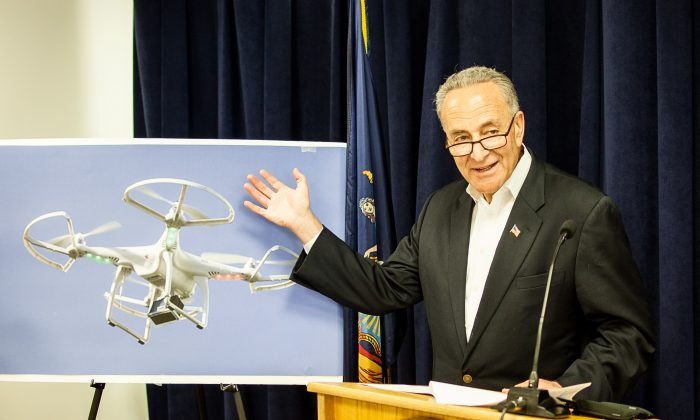 NEW YORK—Emergency responders searching for survivors in disaster areas or stealthy spies floating cameras outside our bedroom windows, drones, or unmanned aircraft systems (UAS), are getting a foothold in our everyday lives. Yet who can fly them and for what purpose is not clear just yet.

The military has been using drones since at least the 1960s, but civilian use has boomed just recently. The industry can provide over 100,000 jobs by 2025, at least 3,300 for New York state, according to the Association for Unmanned Vehicle Systems International (AUVSI).

Drones already help to catch criminals and study wildlife in the Arctic. Farmers even want them to monitor crops, yet the potential for misuse is just as abundant as the drones themselves.

The Federal Aviation Administration (FAA) reports about two dozen accidents involving drones in the past five years and over 200 more incidents labeled “unsafe.”

Part of the problem is incomplete FAA regulations. Since 2012, the FAA cannot pass policies for “model aircraft,” defined as flown within an operator’s line of sight, under 55 pounds, below 400 feet, in an unpopulated area, and for hobby or recreational purpose.

Yet, earlier this year a federal judge dismissed the FAA’s $10,000 fine against Raphael Pirker for flying a drone to shoot a commercial. Pirker successfully argued he flew a model aircraft, excluded from the FAA oversight.

Pirker’s shooting of a commercial may itself be hard to pass off as a hobby or recreation. So, if he flew a drone for a commercial purpose, what are the regulations? The case made the situation unclear.

“Commercial operations are only authorized on a case-by-case basis,” the FAA website states, suggesting all other commercial drone flights are illegal.

In 2012, Congress told the FAA to come up with new regulations by September 2015, a far-away deadline for the fast-developing industry. “[U]ntil the FAA puts the necessary rules in place, the technology will remain largely grounded,” AUVSI spokesperson Melanie Hinton stated in an email response.

Meanwhile, Pirker’s case may encourage businesses to start using drones with no permits at all.

New York Sen. Chuck Schumer called on the FAA and the Commerce Department this Sunday to have the regulations for small commercial drones ready by the end of 2014. “New York City has become the Wild, Wild West for commercial and hobby drones,” he said.

The FAA may have a hard time with his request though, as a recent inspector general’s report suggested the agency is having trouble even with the 2015 deadline. “Developing all the rules and standards we need is a very complex task, and we want to make sure we get it right the first time,” the FAA states.

Schumer still countered this argument, saying at least some regulations are needed now and can be updated later.

The FAA seems to agree, expecting to publish a proposed set of rules for drones under 55 pounds later this year.

“That proposed rule will likely include provisions for commercial operations,” its website states.