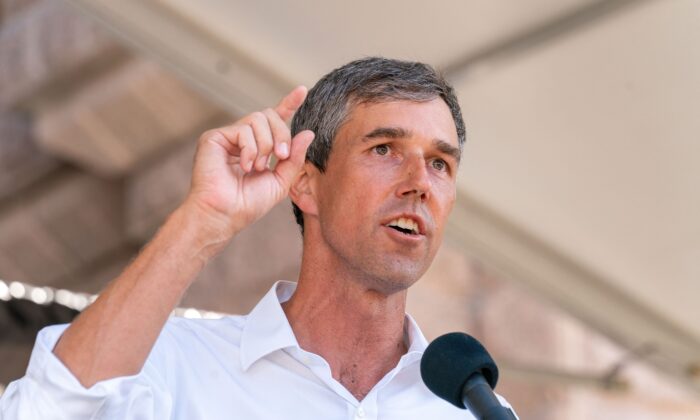 Beto O'Rourke speaks at the We Are the Moral Resurrection! Georgetown-to-Austin March for Democracy rally to support voting rights at the Texas State Capitol in Austin, Texas, on July 31, 2021. (Suzanne Cordeiro/AFP via Getty Images)
Texas

Beto O’Rourke has backtracked from comments he made in 2019 when he asserted that he would confiscate AR-15-style firearms from Americans.

The Democrat, who announced his run for Texas governor on Nov. 15, said on Tuesday that he’s “not interested” in taking anyone’s firearms.

“I’m not interested in taking anything from anyone,” O’Rourke told supporters during a campaign stop in Tyler, Texas, according to KLTV. “What I want to make sure that we do is defend the Second Amendment.”

He added: “I want to make sure that we protect our fellow Texans far better than we’re doing right now. And that we listen to law enforcement, which [Gov.] Greg Abbott refused to do. He turned his back on them when he signed that permitless carry bill that endangers the lives of law enforcement in a state that’s seen more cops and sheriff’s deputies gunned down than in any other.”

The U-turn comes just months after O’Rourke doubled down on his comments regarding removing AR-15-style firearms in an interview with the Texas Tribune.

“I think most Texans can agree—maybe all Texans can agree—that we should not see our friends, our family members, our neighbors, shot up with weapons that were originally designed for use on a battlefield,” O’Rourke told the publication.

O’Rourke, whose run for Texas governor targets the incumbent Gov. Greg Abbott, who is seeking a third term, vehemently endorsed confiscating guns back in 2019.

He told people watching a presidential primary debate in September of that year: “Hell yes! we’re gonna take your AR-15, your AK-47.”

When asked whether he’d actively force Americans to give up their guns, O’Rourke said: “I am if it’s a weapon that was designed to kill people on the battlefield. If the high-impact, high-velocity round, when it hits your body shreds everything inside of your body—because it was designed to do that—so that you would bleed to death on a battlefield. And not be able to get up and kill one of our soldiers.”

“We’re not going to allow it to be used against fellow Americans anymore,” O’Rourke added.

Earlier this week, O’Rourke took aim at Abbott for supporting constitutional carry, something that the Democrat has vowed to repeal if elected governor.

He wrote on Twitter on Feb. 9: “The number of Texans shot to death has gone up EVERY single year under Abbott. 4,164 Texans in 2020 alone. How does Abbott respond? By signing a dangerous law that makes it easier for criminals to carry a loaded gun in public. His radical agenda is killing the people of Texas.”

Texas in September became the latest U.S. state to allow individuals to carry a gun without a permit.

First signed into law by Abbott in mid-June, the bill means that Texans who are aged 21 and older and who are legally able to purchase and own a handgun will no longer require a license to carry one and will not have to undergo training either.