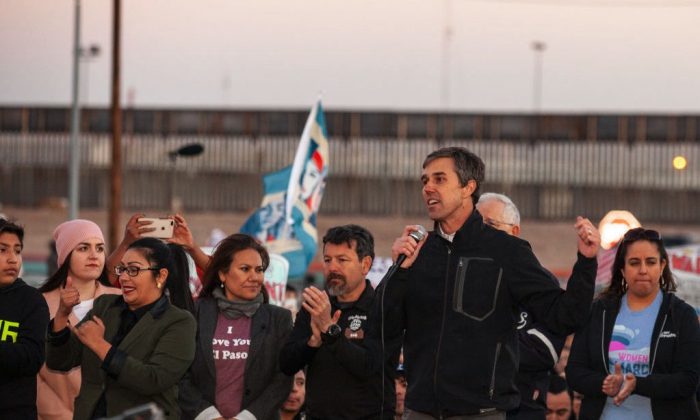 Beto O’Rourke, former congressman and potential candidate for the 2020 presidential election, said that if given the chance, he would tear down the existing border barrier in El Paso, Texas.

“Absolutely, I’d take the wall down,” said O’Rourke, who represented the region during his term in congress, in an interview on MSNBC.

Beto O’Rourke when asked, since Rep. @DanCrenshawTX asked on Twitter, if he would tear down the walls that are already in place: Yes and I think a referendum to do so would pass. pic.twitter.com/ENZuYvdqEa

The fencing that surrounds El Paso, which is near the Mexican city of Juarez, has become a point of contention in recent political skirmishes.

‘If You Could Snap Your Fingers’

O’Rourke’s comment came in response to a question posed on Twitter by Rep. Dan Crenshaw, R-Texas. “If you could snap your fingers and make El Paso’s border wall disappear, would you?”

Crenshaw added, “Because this DHS graph shows that when the wall was built, illegal crossings dropped significantly.”

.@BetoORourke should answer a simple question tonight with respect to the border debate:

If you could snap your fingers and make El Paso’s border wall disappear, would you?

Because this DHS graph shows that when the wall was built, illegal crossings dropped significantly. pic.twitter.com/JgquXfw2Ee

The Republican representative posted another set of graphs which appear to correlate the erection of barriers with drops in illegal border crossings.

“For all the critics trying to find ANY other explanation for why El Paso’s illegal crossings dropped after building a fence,” Crenshaw wrote, “how do you explain these graphs? How do you explain what we see in Brownsville, where fencing dramatically reduces crossings?”

For all the critics trying to find ANY other explanation for why El Paso’s illegal crossings dropped after building a fence, how do you explain these graphs? How do you explain what we see in Brownsville, where fencing dramatically reduces crossings? pic.twitter.com/I3QQ7aEHDD

‘Walls Are Not Immoral’

President Donald Trump held a rally in El Paso on Monday, where he again made a case for building a border barrier.

Trump highlighted El Paso as an example of the success of border fencing, pointing to a fall in crime rates as barriers were erected.

Sen. Ted Cruz (R-Texas), one of the speakers before Trump, also emphasized the effectiveness of physical barriers.

“We saw in El Paso where there was high traffic of illegal crossings, we built a wall and the crossings plummeted,” he said.

Cruz also called on the Democrats to “let go” of hate and anger to reach over the aisle and make America safe.

“Stop sitting there as you did in the State of the Union,” he said. “To the Democrats in Washington, the path forward is not open borders and socialism.”

It is difficult, however, to determine how much of the decrease can be attributed to the fence, parts of which were erected in El Paso in the 1990s.

Ciudad Juárez, Mexico, which is located directly across the border, has significantly higher levels of violence. Juárez had 1,247 murders in 2018, UPI reported, while in the same year El Paso had only 23 murders.

O’Rourke, who, like Trump, also held a rally in El Paso on Monday, claimed at the event that the city’s relatively low crime rates were “not because of walls, but in spite of walls.”

He doubled down on his assertion that walls do little to prevent crime in the NBC interview, saying, “Here’s what we know: after the Secure Fence Act, we have built 600 miles of wall and fencing on a 2,000 mile border. What that has done is not in any demonstrable way made us safer.”

“The wall has not saved lives. It has ended lives,” O’Rourke said, adding that the fencing has forced migrants to take longer, more dangerous routes, leading to the deaths of some 4,000 people trying to enter the United States.

“They’re dead, over the last 10 years, as we have walled off their opportunity to legally petition for asylum to cross in urban centers, like El Paso,” he said.

Trump panned O’Rourke’s claims that the wall hasn’t had an impact on crime rates: “They are full of crap when they say it hasn’t made a big difference,” he said at his rally.

The White House said on Feb. 14 that Trump will declare a national emergency to secure funds for the physical barrier along the U.S.–Mexico border.

“President Trump will sign the government funding bill, and as he has stated before, he will also take other executive action—including a national emergency—to ensure we stop the national security and humanitarian crisis at the border,” White House press secretary Sarah Sanders said in a statement.

“The President is once again delivering on his promise to build the wall, protect the border, and secure our great country.”