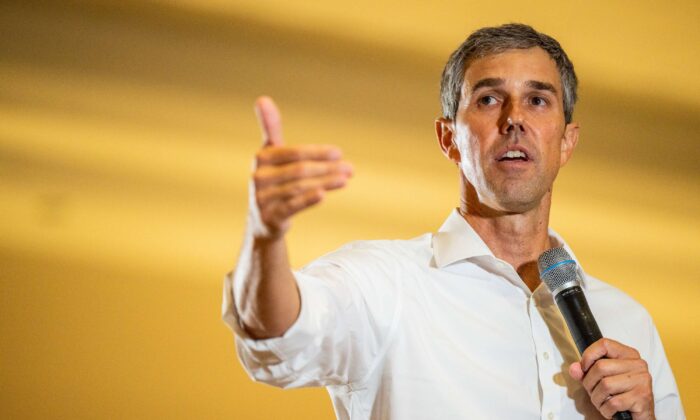 Beto O’Rourke Diagnosed With Bacterial Infection While Campaigning for Midterms

Beto O’Rourke, the Democrat nominee in the Texas governor’s race, said on Aug. 28 that he’s been diagnosed with a bacterial infection amid his campaign ahead of the midterm elections on Nov. 8.

O’Rourke, 49, confirmed the news in a statement on Twitter and said he planned to take a break from the campaign trail to recover.

“After feeling ill on Friday, I went to Methodist Hospital in San Antonio where I was diagnosed with a bacterial infection,” he wrote, while praising the “extraordinary team” at the hospital for his “excellent care and attention.”

“While my symptoms have improved, I will be resting at home in El Paso in accordance with the doctor’s recommendations.”

O’Rourke didn’t say when he would return to the campaign trail, which he started on in July. The news of his illness comes after he canceled a number of events last week, including in Lockhart, Texas.

“I am sorry to have had to postpone events because of this, but promise to be back on the road with you as soon as I am able,” he wrote.

O’Rourke was set to make appearances at Corpus Christi, Three Rivers, and Goliad this weekend for his 49-day “A Drive for Texas” campaign event but will reschedule those appearances, his campaign staff told 3NEWS.

O’Rourke is challenging incumbent Gov. Greg Abbott, a Republican, in the November election, in what’s expected to be a close race.

Abbott was leading by 7 percentage points in a recent Dallas Morning News/University of Texas at Tyler poll (pdf).

O’Rourke has joked that he’s “watching [his] swearing” at recent campaign stops after responding to a heckler with an expletive earlier in August. The incident came after the individual, who was in the audience at a campaign stop in Mineral Wells, Texas, on Aug. 10, laughed when O’Rourke described AR-15s as “weapons of war,” in reference to the mass shooting at Robb Elementary School in Uvalde, Texas, on May 24.

O’Rourke has advocated for universal background checks, safe storage laws, and red flag laws and has criticized Abbott during his campaign, accusing him of doing little to address shootings.

Abbott, on the other hand, has called on the Biden administration to address mental health issues across the United States, which he believes play a vital role in mass shootings. Following the Uvalde shooting, he also issued a disaster declaration to fast-track state and local resources for the community and ordered the Texas School Safety Center to conduct comprehensive school safety reviews across all public schools to ensure stringent safety procedures were in place ahead of the new school year.

The governor’s campaign has largely focused on the issue of immigration and the crisis at the Texas–Mexico border, which he has blamed on the Biden administration’s “open border policies” that are “overwhelming Texas communities.”