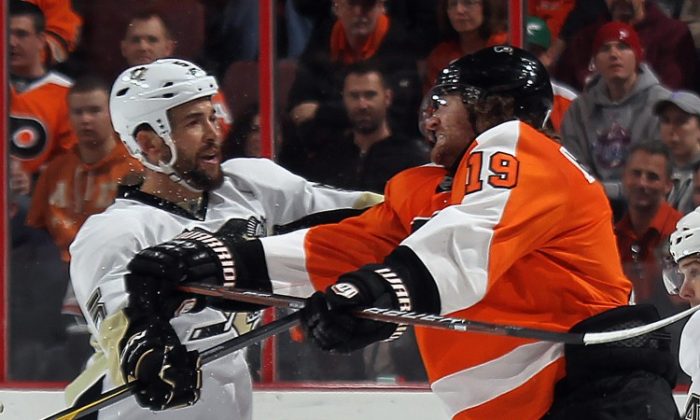 Pittsburgh and Philadelphia renew their heated rivalry in the first round of the NHL playoffs. (Bruce Bennett/Getty Images)
Hockey

Best Time of the Year for Hockey Fans

It’s the most wonderful time of the year for hockey fans. The NHL playoffs are upon us. That means multiple great hockey games every night for the next few weeks.

The fair-weather fans will jump on the NHL playoffs bandwagon for the first round (and maybe longer). It’s time for the NHL to take center stage in the North American sporting landscape.

After a bit of a breather from the end of the regular season last Saturday, three series kick off Wednesday night, four more start Thursday night, and one begins Friday night.

The NHL is all about parity these days and the margin between having home ice advantage in the first round and not having it is very slim. While any team would love to play a Game 7 at home, 10 of the 16 playoff teams have strong road records.

One could argue Ottawa would actually prefer Game 7 on the road given their stronger road record and the tremendous success they’ve had at Madison Square Garden against their first-round opponents, the New York Rangers.

The grind to win the Stanley Cup is a lengthy one. The champion won’t be awarded until possibly mid-June. The defending champions Boston Bruins did it the hard way last year with three of four series going the full seven games.

In the first round, teams will want to be able to go with four lines for most of the game, not pick up any additional injuries, and get contributions from everybody. For a team to go all the way, depth is crucial, although to get through one round, it may not be as crucial.

With that said, here are two matchups of particular interest in the first round.

Flyers winger Scott Hartnell said it would be a “bloodbath.” Yes, these two teams don’t like each other. The Pennsylvania derby (to use an English football term) did get ugly this season.

With the two teams facing each other twice in the final week of the regular season, a total of 115 penalty minutes were handed down.

Both teams are among the highest scoring in the NHL. Nothing much more needs to be said about the firepower of a team that has the league’s top point-getter Evgeni Malkin and Sidney Crosby on it. Interestingly, Malkin also led the league in scoring prior to the Penguins winning the Cup in 2009.

But this year, Pittsburgh’s offense is arguably more potent with 40-goal scorer James Neal along for the ride. The Pens can count on five 20-goal scorers—and that does not include Sidney Crosby or the reformed Matt Cooke who had 19.

The Flyers offense is also very well balanced with four 20-goal scorers (and two more at 19) and is led by the ultra-skillful Claude Giroux, who finished third in scoring with 93 points.

Where Pittsburgh gets my vote for the series win is in the goaltending department. Marc-Andre Fleury has played in two Stanley Cup finals and won one of them. By contrast, Philly’s Ilya Bryzgalov has been inconsistent and attracted attention because of his reaction to his poor play.

Bryzgalov’s numbers don’t tell the full story. While they are a shade worse than Fleury’s, the key thing is his confidence. If Pittsburgh’s rapid-fire attack can get a couple of quick goals on him, doubts can creep into his mind and the Flyers could wind up benching him.

The Flyers are a younger team now after having shipped off Jeff Carter and Mike Richards and without the experience of Chris Pronger on the back end.

Pittsburgh can deal with the physical play of Philadelphia and should advance in five or six games.

Nashville signaled their intentions to go for it all at the trade deadline. The Red Wings are the playoff veterans.

The pressure is on both teams, as big decisions need to be made in the offseason as far as retaining key players.

For Nashville, it took some time to integrate new players Andrei Kostitsyn, Hal Gill, and Paul Gaustad into the lineup as the Predators had an unspectacular month of March. But they’ve since won three straight and beaten Detroit twice since their revamping after the trade deadline.

For Detroit, it’s another go-around for Pavel Datsyuk, Henrik Zetterberg, Nicklas Lidstrom and company. The nucleus of this well-managed team has stayed intact for several years.

This is a matchup as finely balanced as they come. It’s hard to argue that either Nashhville or Detroit has a clear advantage in any facet of the game. Detroit has the experience on their side, but Nashville has home ice and a bit of momentum on their side entering the first round, while Detroit lost four of its last six games.

The Red Wings are only one of two playoff teams with a losing record on the road (Washington Capitals); however, they did go through a stretch of 23 consecutive home victories.

Nashville has home ice advantage, which looks to be quite important in this series. It is for this reason, that I say they advance in seven games.

There are many more compelling matchups to discuss and analyze but most importantly, just let the best version of reality television play itself out in front of you.