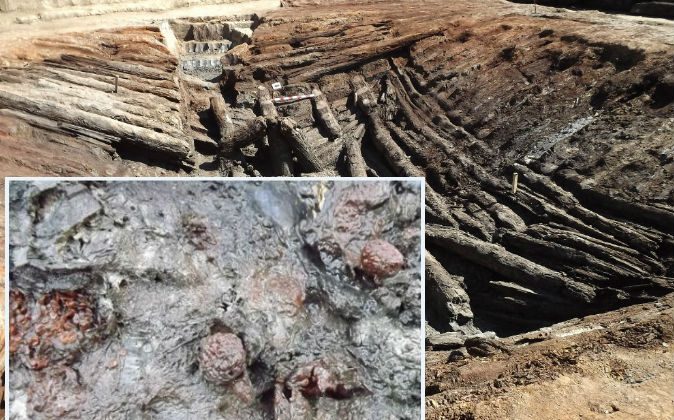 Ancient wild fruits (L) found in a burial chamber in Georgia (R) were placed there between 4,000 and 5,000 thousand years ago, say archaeologists. (Courtesy of the Georgian National Museum)
archaeology

An Early Bronze Age burial mound in Georgia, known as a kurgan, held in its depths astonishingly well preserved wild fruits. Sitting underground for thousands of years, left as nourishment for the hungry souls of the dead, these fruits even exuded the aroma of fresh fruit when researchers sliced into them.

They were preserved in honey. Honey was also found on the bones in the burial chamber, suggesting it may have been used for embalming the corpses.

Honey has a low concentration of water and a high concentration of sugar. Much like salt, it can push the water out of bacteria cells, drying them up before they can get to the food (or corpses) the honey is protecting. Honey is essentially a combination of sugars and hydrogen peroxide. Just as hydrogen peroxide is used to clean bacteria from wounds, it can also kill bacteria that cause food to spoil.

Ancient Assyrians, who lived in a region east of Egypt, also preserved corpses in honey. When Alexander the Great conquered the Persian city of Susa in the 4th century B.C., he found large quantities of 200-year-old purple dye well-preserved under a layer of honey.

Skipping ahead to 2011, researchers isolated a bacterial strain in some types of honey that has very unusual properties. One of it’s surprising characteristics is its ability to produce a compound, thurincin H, that forms into a helical structure. This structure may allow it to infiltrate the membranes of other bacteria to destroy it.

“Like a wolf in sheep’s clothing, the compound mimics the structure of the molecules that form bacterial membranes … but it may disrupt those membranes by forming a rigid pore,” explained a Cornell University article.

Other Significant Finds in the Kurgan

Dr. Zurab Makharadze, head of the Centre of Archaeology at the Georgian National Museum, explained via email some other significant finds at the kurgan.

The mound was about 330 feet across, and the inner space of the construction was 30 by 20 feet. It contained two four-wheeled wagons, some of the best surviving examples of such devices from the time.

Archaeologists found evidence of ancient robbery, including tunnels into the chamber and disturbed artifacts and human remains. It is possible some of the robbers had attended the burial ceremony, as some evidence suggest the thieves knew what was placed where, Makharadze told Georgian publication Agenda.

It appears the family contained in the chamber was accompanied in death by servants—human sacrifices.

Riches remained despite the robberies, including ornamented vessels, amber beads, and 23 golden items, “among them rare and high artistic crafted jewelry,” Makharadze said. A unique wooden armchair was found, along with nuts, red berries, textiles, and arrowheads.

An armchair found in the Early Bronze Age burial chamber in Georgia. (Courtesy of the Georgian National Museum)

Golden and cornelian (a reddish-brown mineral) beads found in the Early Bronze Age burial chamber in Georgia. (Courtesy of the Georgian National Museum)

The good condition and unique nature of many of the artifacts make this an important site, Makharadze said: “[It] keeps huge scientific information and its importance is undoubtedly obvious for Caucasian and Near East archaeology.”

Agenda noted that the kurgan sites are as important to understanding ancient Georgian culture as the pyramids are in the study of ancient Egypt. The human remains are being tested at a lab in Germany to determine the relationships between the people buried in this kurgan and how they died.