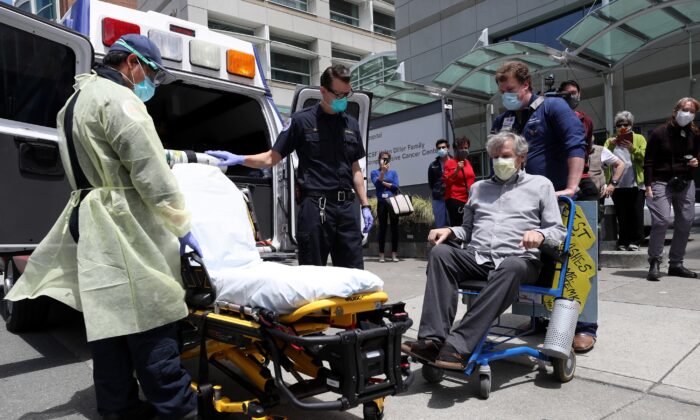 Ronald Temko, sitting, a COVID-19 patient, prepares to be loaded into an ambulance after discharge from the UCSF Medical Center at Mount Zion in San Francisco, Calif., on May 20, 2020. (Justin Sullivan/Getty Images)
By Zachary Stieber

The current “best estimate” put the mortality rate for COVID-19 at 0.4 percent for patients who show symptoms, a federal health agency said.

The estimated rate is based on the number of people showing symptoms who die “of the disease,” the Centers for Disease Control and Prevention (CDC) said.

COVID-19 is a disease caused by the CCP (Chinese Communist Party) virus that primarily causes severe illness in the elderly and people with underlying health conditions.

“This parameter is not necessarily equivalent to the number of reported deaths per reported cases, because many cases and deaths are never confirmed to be COVID-19, and there is a lag in time between when people are infected and when they die,” the CDC added.

Anyone who dies in the United States with COVID-19 is counted as a COVID-caused death, health officials said last month. The CDC later directed states to include “probable” deaths, sparking concern among some doctors.

Doesn’t Include Those Without Symptoms

While the estimated mortality rate is 0.4 percent, that number doesn’t include the estimated 35 percent of people who become infected and don’t show symptoms.

The figures were published in new guidance for modelers and public health officials from the Centers for Disease Control and Prevention, or CDC, using data received prior to April 29.

Actual mortality rates are hard to pin down because so many people become infected with the CCP virus and experience no, mild, or moderate symptoms.

A lack of testing in the early days of the pandemic left many wondering whether they had the virus at one time or another. Developed more recently, antibody tests can show whether one developed a defense against the virus, signaling that they were infected in the past.

Health officials in March estimated a true mortality rate of 1 percent or less.

According to figures compiled by Johns Hopkins University, the United States has recorded 1,577,758 CCP virus cases as of May 22. Nearly 95,000 Americans have died with COVID-19.

Mortality rate estimates are important because they can guide health policies and give insight into how different groups should act during the pandemic.

The best estimate includes 1.3 percent of those 65 and older getting the disease and showing symptoms dying. The estimated rate for those 50 to 64 is 0.2 percent and for those zero to 49 is 0.05 percent.

Some 40 percent of CCP virus transmission is happening before people feel sick, according to the best estimate, and the average time from exposure to symptom onset is around six days.

About three-quarters of patients who were admitted to ICUs were placed on mechanical ventilation to help them breathe.