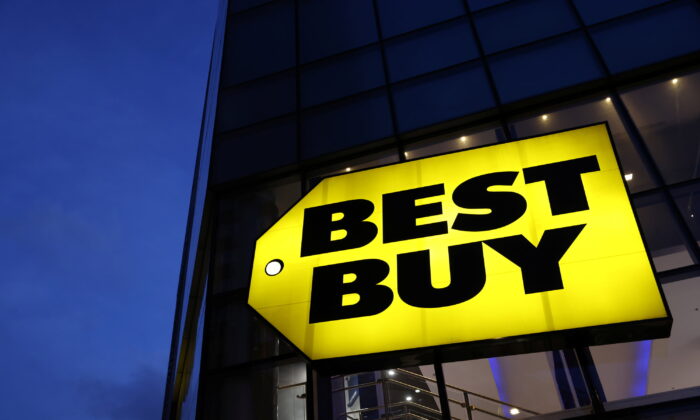 The Best Buy logo is seen at a store in the Manhattan borough of New York City on Nov. 22, 2021. (Andrew Kelly/Reuters)
Companies

The CEO of Best Buy Co. Inc. said on May 24 that the company is “not planning for a full recession,” but acknowledged that tough times lie ahead with regard to slower consumer sales.

“I think I want to start with a reminder that this is a very stable industry,” CEO Corie Barry said on an earnings call on May 24. “Consumer electronics, over time, is a stable industry. And the last two years have clearly underscored the importance of tech in people’s lives.”

“It’s fair to say that we’re factoring in elements of softer demand, but we are not planning for a full recession or guide. We’ll not assume a full recession at this point. Obviously, if that were the case, we will continue to update the performance and the expectations. But I think I would characterize our guide more as a softer environment, not a full recession,” Barry added.

The consumer electronics retailer reported lower sales for its fiscal first quarter of 2022 and lowered its outlook for the year, citing softer demand, higher inflation, and increased supply chain costs, as well as the war in Ukraine.

Best Buy said it now expects full-year revenue ranging between $48.3 billion and $49.9 billion, compared with a prior outlook of $49.3 billion to $50.8 billion.

It also expects a comparable sales declines of 3 percent to 6 percent, compared to the prior outlook of a decline of 1 percent to 4 percent.

Revenue for the quarter fell roughly $1 billion from the previous year to $10.6 billion.

Comparable sales dropped 8 percent, compared with a rise of 37 percent in the first quarter of 2021.

Despite the expected slowdown, Best Buy said it continues to be in a “fundamentally stronger position than we were before the pandemic from both a revenue and operating income rate perspective.”

“We are confident in the strength of our business and excited about what lies ahead. We have a unique value creation opportunity and are investing now, as we have successfully invested ahead of change in our past, to ensure we’re ready to meet the needs of our customers and employees and retain our unique position in our industry,” the electronics retailer wrote in its quarterly results.

While a number of economists and companies have expressed concerns over a potential recession amid rapidly rising interest rates, others have suggested this may not be the case.

San Francisco Federal Reserve Bank President Mary Daly on May 23 cited strong momentum in the U.S. economy, noting that the central bank can raise interest rates to where they are no longer stimulating economic growth without starting a recession.

“We really have a strong economy,” Daly said in an interview on Fox News. “I think that we can weather this storm, get the interest rate up … price stability restored and still leave Americans with jobs [a plentiful] and with growth expanding as we expect it to.”