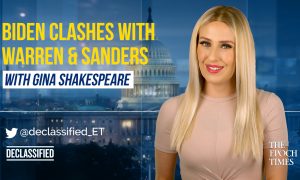 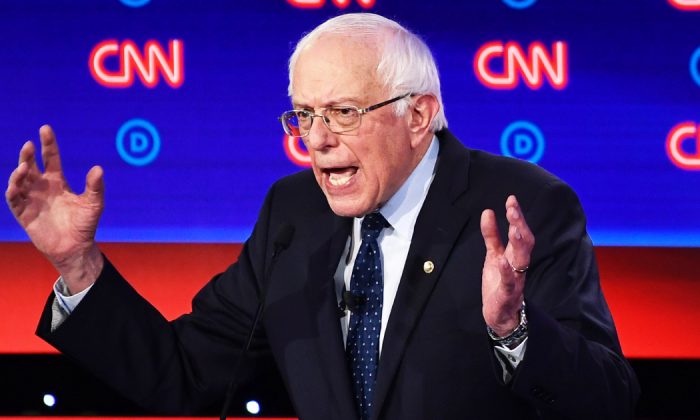 Democratic presidential hopeful Sen. Bernie Sanders (I-Vt.) delivers his closing statement during the first round of the second Democratic primary debate of the 2020 presidential campaign season hosted by CNN at the Fox Theatre in Detroit, Mich. on July 30, 2019. (Brendan Smialowski/AFP/Getty Images)
2020 Election

Bernie Sanders Unveils Tax Plan Targeting Ultra Rich to Fund Medicare for All, Housing for All

Sen. Bernie Sanders (I-Vt.) revealed on Sept. 24 his plan for generating revenue to fund costly social spending proposals such as his Medicare for All plan—taxing the ultra-rich in the country.

Sanders, who is running for the 2020 Democratic nomination, has repeatedly faced skepticism for his Medicare for All plan, which is expected to significantly raise government spending and give the government a monopoly in the healthcare insurance industry. Some analysts estimate that that plan would cost $32.6 trillion over 10 years. Despite the costs, the Vermont senator’s universal health care plan is embraced by many progressive lawmakers and presidential candidates in the Democratic party, indicating the party’s push toward the far-left.

There should be no billionaires. We are going to tax their extreme wealth and invest in working people. Read the plan: https://t.co/RJDLvX5H4c

More moderate Democratic candidates have also taken the opportunity to question Sanders on how his progressive proposals would work. During the third Democratic debate, frontrunner Joe Biden took the opportunity to push Sanders and fellow progressive contender Elizabeth Warren to explain how they would pay for their ambitious health care plans. House Speaker Nancy Pelosi (D-Calif.) has also spoken out against the healthcare proposal.

Similarly, Sanders’s other plans such as his newly unveiled Housing for All also has a hefty price tag. That plan, which he says would provide every American with housing, is expected to increase government spending by about $2.5 trillion.

Sanders, who has centered his campaign on income inequality, says his new “Tax on Extreme Wealth,” which will establish an annual tax on the top 0.1 percent of U.S. households, would pay for those proposed measures and more.

Under the proposed plan, married couples with a net worth over $32 million will be taxed 1 percent on their wealth above the threshold. This rate will incrementally increase to the top rate of 8 percent on wealth over $10 billion.

He says his plan is expected to reduce the wealth of billionaires by half over 15 years with the purpose to disperse the concentration of wealth and power of “this small privileged class.”

“At a time when millions of Americans are working two or three jobs to feed their families, the three wealthiest people in this country own more wealth than the bottom half of the American people,” Sanders says.

Sanders’s plan follows Warren’s plan to increase the tax rate on the nation’s top 2 percent earners to fund her progressive social security reforms. Under Warren’s plan, unveiled earlier this month, a 14.8 percent tax on wages would be imposed on individuals who earn more than $250,000 a year. Moreover, the plan also imposes a new 14.8 percent tax on investment income on individuals making more than $250,000 or families making more than $400,000 annually.

According to the tax foundation, net wealth taxes could “harm risk-taking and entrepreneurship, harming innovation and impacting long-term growth,” citing an organization for economic co-operation and development (OECD) report. The OECD report also found that the wealth tax could spur investment and risk-taking arguing that entrepreneurs are likely to enter into more riskier ventures to maximize their return that was eroded from a wealth tax.

Several countries in the @OECD have repealed their wealth taxes in recent years, noting their economic impact among other reasons https://t.co/okJ7M5kkUX @danieldbunn pic.twitter.com/vqdiiRmoEE

The number of OECD countries that implemented a wealth taxation program grew from nine in 1965 to 14 in 1996 and dropped to four countries in 2017.